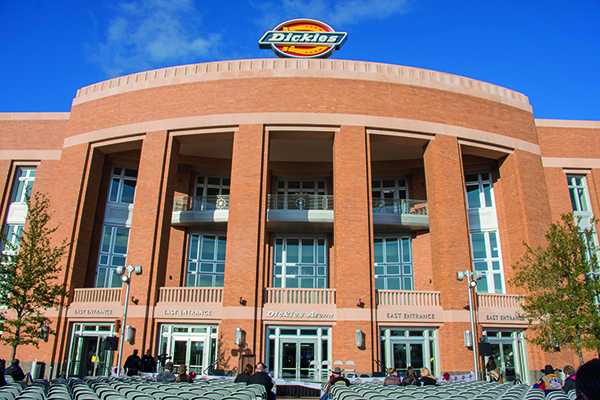 Dickies Arena is a 14,000 seat multipurpose arena, located within the Will Rogers Memorial Center in Fort Worth, Texas.

The facility is the result of a pioneering public-private partnership between Fort Worth, Tarrant County, the state of Texas, and a group of private-sector participants, including foundations, individuals and organizations. The arena is owned by Fort Worth and managed by the private sector non-profit organization Trail Drive Management Corp (TDMC).

PREMIER HOSPITLAITY INTERNATIONAL MAGAZINE spoke to Gregory Hoss from David M. Schwarz Architects about the arena. He told us: “We have actually been involved with the arena project since the late 1990s – if you can believe that! We were involved in working on a master plan for the area of the Western Heritage Center, which the arena is now part of. We designed the National Cowgirl Museum and Hall of Fame there in the 2000s so we did some initial master planning early on and have worked on the project on and off until it was completed.”

Gregory said: “The client had a relative idea of what they wanted to have happen. It was very clear that he and the city wanted the building to feel as though it was part of the larger Will Rogers Complex. The area sits on some land that is adjacent to the historic Will Rogers Center, built in the 1930s. That building was done in a Western Art Deco aesthetic so in the arena building there is a lot of inspiration taken from those 1930s buildings, in terms of the use of masonry, the colour and type of material as well as the attitude about these buildings being very civic buildings.

“The building sits adjacent to the barns that are part of the Fort Worth Stock Show & Rodeo event which is a huge tradition in Fort Worth. The building has therefore been configured so that the basement is a big barn that houses the animals used for the rodeo during that part of the year. Functionally, that space can also be used as a convention space when it is not being used for the rodeo.”

With a wide variety of seating configurations, the arena is able to accommodate many styles of events. There are three standard levels: plaza level (100-section), suite and loge box level, gallery level (200-section) and one additional with floor seating.

“The seating area in the arena is really flexible,” said Gregory.  “It goes from 9,000 seats for the rodeo, which is the smallest capacity, to over 14,000 seats for a centre stage concert so there is the ability to have flexible seating and a very automated configuration throughout the arena.”

Dickies Arena was designed with the intent of having the sound of a concert hall to further accommodate musical performance and enhance patron experience. Great care was given to minimise or eliminate echo.

Dickies Arena has the second largest, continuous 360 degree screen in North America. The scoreboard is so large it extends past the width of the basketball court. The board measures 105 feet across and is 26 feet tall, with 1.2 million LEDS installed on the board.

Gregory added: “One of the highlights for us was to be able to design an arena which is really a sports arena but have it appear to be a more civic building, in the tradition of the old civic auditoria which you don’t really see any more. In this case the city and the stock show really wanted the building to be a living room for the citizens of the Fort Worth. There are lots of beautiful details in the lobbies & restaurant, the bathrooms have high quality finishes, and the clubs and suites are beautifully detailed. Overall the building is really meant to be a place that the citizens of Fort Worth can be proud of.

“We are incredibly proud and humbled to have had the opportunity to have worked on this project. These projects are few and far between and hopefully this is a project that will last for many generations and hundreds of years. We hope that the community embraces the building and that over the years and generations of it being used, it will be seen as an essential part of the community.”

The first event held at the arena was a Twenty One Pilots Concert on 8th November 2019.