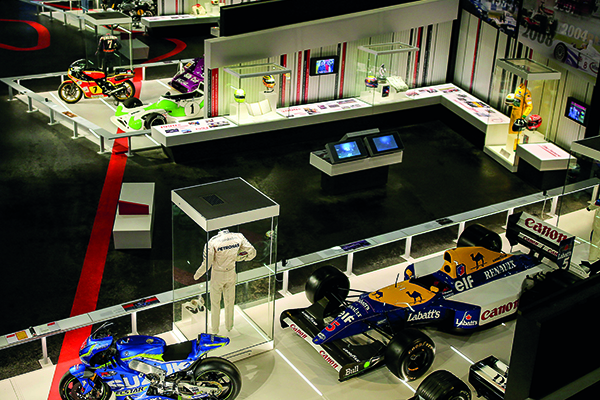 The Silverstone Experience takes visitors on a thrilling 2.5hour journey celebrating the past, present and future of Silverstone. Fascinating stories of human endeavour, great sporting rivalries and engineering innovation are told using state-of-the-art interactive displays and iconic film and imagery that will appeal to and entertain all age groups.

The attraction opened following a seven-year project supported by HRH Prince Harry and stars from across motor sport, including world champion Sir Jackie Stewart, Formula 1 engineer Ross Brawn and commentator Murray Walker.
The 4000m2 building restoration and design was led by award-winning architect Jane Lock-Smith of Cube Design. The exhibition, which features over 20 hands-on activities from climbing into a replica 1940s grand prix car to learning how to pilot a Wellington Bomber in a recreated training machine, was designed by sports museum specialists Mather & Co.

The charity behind the initiative, Silverstone Heritage Ltd, was awarded a grant of £9.1m by The National Lottery Heritage Fund and is aiming to inspire the next generation of engineers with the hands-on family attraction. Visitors will learn about the science behind the modern-day sport as well as seeing historic cars and bikes. On display will be Barry Sheene’s 1979 Suzuki, leathers and helmet – modified with a hole to allow him to smoke whilst wearing it – and Nigel Mansell’s 1992 British Grand Prix-winning Williams.

Unseen items including programmes and trophies from the BRDC archives have been given a new home as part of the project, which includes the creation of a state-of-the-art Collections and Research Centre. Archive items on display for the launch include a driver scrapbook from the 1940s, a valuable collection of BRDC gold stars won by Formula 1 champion James Hunt and a 1992 grand prix signing-on sheet featuring the signatures of Ayrton Senna, Michael Schumacher, Mansell and Damon Hill.

Sally Reynolds, CEO of Silverstone Heritage Ltd, said:
“Creating a home to tell the historic story of Silverstone was first discussed by the BRDC as long ago as 1971, so I am immensely proud to see this seven-year long project come to fruition. The talented and committed team of staff and suppliers behind the project have built an exceptional attraction that will inspire visitors with its incredible stories.”

Sir Peter Luff, Chair of The National Lottery Heritage Fund, has praised the unique and inspiring blend of sport, science and history. He said:
“The National Lottery Heritage Fund has an incredible track record when it comes to funding projects that will inspire future generations of engineers and scientists across the UK. We’re delighted that our funding for The Silverstone Experience will continue to do just that, whilst also highlighting some of the incredible feats in British motorsporting heritage that this iconic venue is home to.”

To find out more about The Silverstone Experience, please visit www.silverstone-experience.co.uk.

MAC Consultancy and the Silverstone Experience

MAC are a privately owned construction consultancy working with an extensive and varied list of clients. They offer bespoke services to their clients, and were responsible for bringing The Silverstone Experience to life. PREMIER CONSTRUCTION MAGAZINE spoke to Lee Butler of MAC Consultancy, who explained what happens behind the scenes to keep a high profile project like this on track.

“Our bespoke services are quite significant for a project like this. Generally, our service is to manage all project costs, to deliver the project from a project management perspective but here we undertook a full contract service as well, and we managed the tendering process too. The project had to go through OJU (The Official Journal of the EU) because there is public money on this project, and had to be publicly tendered through them.

“We had 30/40 companies interested in that job and we whittled that down to about 15, and eventually we had a tender list of 6 contractors that we were going out to officially tender for the project. In all, we did all cost management, of all variations, as well as physically running the job through construction.

“We were engaged in the project in august 2017, the tender period happened that October and then the project started on site in March 2018.”

“The first challenge was that when the tenders came back in, they were around 20% higher than the client’s budget. So then we had to take down the cost of £23 million to the client’s budget which was around £19 million. The delicate part of this was that we’ve got designers who had been working on the scheme for a year, like CUBE Design for example – they’d designed something that was terrific but we had to as a team, cut it down and do something significantly different. The end result, however, is the same and it still looks the same. An example of this is that the building originally was a concrete frame and we had to move to steel, and that alone saved £1 million.

“There was some real heavy design work to go from the tender to what we actually ended up with. CUBE led that process in terms of design, and they were instrumental in working with us. The amount of work they put in for that was phenomenal, and we managed to do it in 3 months.

“This project had a big heritage side to it, which presented some unusual challenges. We were taking an 80 year old air hangar and building it back up to today’s standards. These hangars were only supposed to last 6 months in the Second World War but the fact it did last for 80 years, shows the scale of the task we had.

“Finally, one of the base build contractors we’d been working with nearly up to the finish of the project unexpectedly went into administration, which left us with very little time to find someone else but Elmwood Projects Limited were the fit out contractor, and within a week, Elmwood were appointed as a new principal contractor. Without them this project would have struggled to get back and running so quickly, so they were a massive help.

“In light of the challenges, the importance for Mac of working on a public, high-profile project for the global home of Formula 1 racing, where Prince Harry is the patron, is huge for any business. He came to do the ‘breaking ground ceremony’ last year and launched it within the hangar, so it’s huge,” Lee concluded.