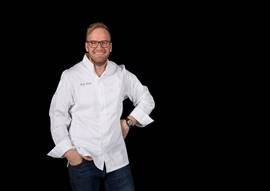 Switzerland’s 5* Superior Hotel Schweizerhof Bern & Spa (www.schweizerhof-bern.ch/en) has announced the appointment of Rudi Reetz as Executive Chef from 1st March 2020. Rudi succeeds Silvan Durrer and takes over the culinary management for the hotel’s legendary Jack’s Brasserie which dates back to 1913, the Lobby Lounge Bar, the Sky Terrace and also the banquet offering.

Having previously worked for Klaus Erfort, who holds three Michelin Stars, in Saarbrücken. the German-French citizen knows the culinary demands of 5* hotels very well. In Switzerland Rudi cooked for guests at the Giardino Mountain in St. Moritz and was responsible for the restaurant offer as Executive Chef at the Giardino Lago in Locarno. Most recently, he delighted his guests as Maître de Maison in the La Pinte du Vieux Manoir in Murten.

“The Schweizerhof Bern has always been a household name in the culinary scene. I am proud to shape the future of the restaurants and the hotel together with the wonderful team” says Rudi Reetz. General manager of the Hotel Schweizerhof Bern & Spa, Maximilian von Reden, is delighted to have Rudi join the team: “With Rudi Reetz we have found a new chef who will enrich the Schweizerhof Bern with his experience, creativity and affinity for culinary art. Our guests can look forward to new culinary highlights”.