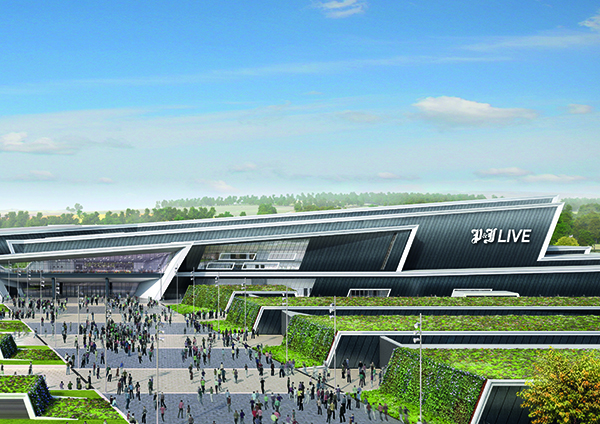 The development also comprises three on site hotels including the adjoining 4-star Hilton with 200 bedrooms, the Aloft Hotel with 150 bedrooms and a third budget hotel to be confirmed with a further 150 bedrooms.

With unrivalled public transport connections, the new venue is located right next to Aberdeen International Airport – the UK’s most connected regional airport, a few short minutes from the city’s new western peripheral route, and it is in prime position for the improved rail links between Aberdeen and the North of Scotland, due to be completed in 2020.

The new facility is an important part of Aberdeen City Council’s plan to grow the city’s economy. TECA is expected to contribute an additional 4.5 million visitors, £113 million of visitor spend and £63m net GVA to the Scottish economy. It will also create 352 full-time-equivalent permanent positions by year 10 of operations, as well as creating over 600 jobs at the peak of the construction period.

Compared to the old Exhibition Conference and Centre (AECC), TECA is much larger, rests on a larger site, and will be better suited to host an annual programme of events similar to that aspired to by other exhibition and conference centres across the UK, Europe and beyond.

The new arena at TECA has a maximum capacity of 12,500 and, in conjunction with the conference halls and subterranean multipurpose space, provides an exhibition space far greater than the old AECC. This has allowed it to compete nationally and internationally for new events, as well as by broadening the appeal of the north east to a global audience.

In light of the aim to grow Aberdeen’s economy and to bring a bigger pinnacle of space for events in the North East, TECA was designed to provide the city of Aberdeen and visitors with a range of flexible spaces to host a large range of exhibitions, entertainment and sporting events. The main conference and exhibition building includes a mezzanine link to the hotel and a basement link to the car park.

The eye-catching design includes a complex roof profile and the arena has public access on three sides and has been modelled to ensure good visibility of the stage. There are VIP boxes around the perimeter of the arena on the first floor and fixed seating has been introduced on the second floor.
Approaching from the external public square, through the main façade is the dramatic main entrance into the ground floor concourse, where there are shops, bars and food and beverage units.

The club lounge, which provides corporate entertainment, has been located within the entrance area, creating real interest and sense of arrival when approaching the main doors. A restaurant is located on the first floor, accessed through the central hub feature, providing good connectivity with the main entrance and concourse.

The 33,250 square metre subterranean space below the main public square functions as a car park which is able to be converted into additional exhibition space for major events. The three exhibition halls have dividing screens between them so they can be either used as one large hall or smaller. In addition, 28 movable walls were installed by Hufcor.

The structure of Aloft Hotel was built over five levels using a steel frame and composite slabs combined with an inverted/standing seam roof and composite/standing seam cladding.
The hotel, located just north of the Hilton Hotel that adjoins TECA was designed by architects Cooper Cromar, with interiors by Twenty2Degrees. The Aloft Hotel is the first of its kind in Scotland and includes a signature WXYZ® bar, Re:mixSM lounge and gym. Designed to appeal to savvy next-gen travellers, the property also features contemporary urban-style interiors, tech-forward amenities and live-music programming.

Both the Aloft and Hilton hotel are managed by the UK’s leading independent hotel management company, RBH.

As a key component in this project’s goal to deliver the most sustainable venue of its type in the UK, an energy centre is the renewable energy solution for the new exhibition and conference centre, providing it with low carbon renewable energy. The new exhibition and conference centre now has a multi-functional energy centre that uses local renewable resources and advanced technologies to produce an energy eco-system. Local crops and Aberdeen’s farm and food waste provided and resourced efficient energy for the building and potentially the masterplan and wider area. The gas produced from waste is fed into the combined cooling, heat and power (CCHP) plant to provide local heating, cooling and power.

TECA is run by P&J Live, the largest event complex in the North of Scotland, boasting world-class conference and exhibition facilities for organisers and delegates across the globe, all sustainably powered by local, renewable energy sources.

Following its success since completion, The Event Complex Aberdeen was recently awarded a 2020 Scottish Property Award in the category of ‘Development of the Year’ (Commercial building). The Scottish Property Awards is an independent awards programme that recognises projects and people in commercial and public property developments across Scotland.

It has also been nominated for a RICS Social Impact Award for the Scottish region. 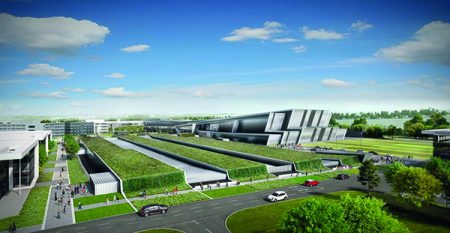