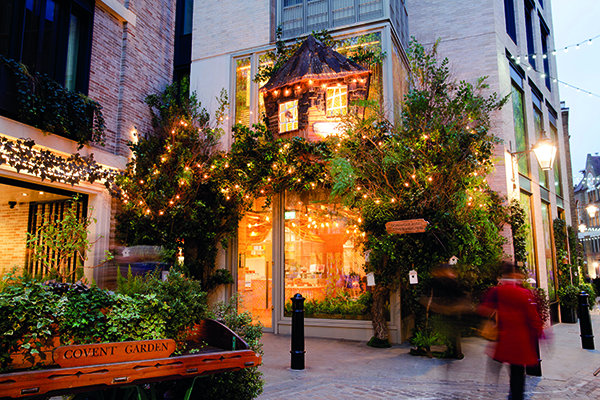 Designer Jonathan Manham said: “When we found the space in Covent Garden it was before we had a concrete concept in mind but as soon as we realised we had a two-storey space and a blank canvas at our hands, it allowed us to get creative with what the concept and design could be. Dominique thought about something you’d go ‘up’ in and he thought a modern treehouse would be perfect; one that evoked and inspired that sense of childhood imagination and creativity.”

Dominique Ansel Treehouse’s loft two-storey space features cosy seating throughout both the ground floor and upper level, with the majority of the bistro’s seating located upstairs in the treetop ‘canopy.’ Guests will find the ‘tree trunk’ at the centre of the ground floor space where a bakery counter greets guests for desserts to takeaway or to enjoy in if they wish. The takeaway bakery counter is filled with beautiful pastries and desserts, and handmade French Viennoiseries like flaky croissants, as well as Chef Dominique’s signature DKA (Dominique’s Kouign Amann; similar to a caramelised croissant and the best-seller in each of his shops around the world). A selection of fresh tarts made fresh daily will also be available.

The modern design was inspired by a grown-up treehouse, lined with blonde and warm woods throughout, cosy seating nooks and casual café tables, and sunken wooden booths set into the ground creating a warm and inviting space for a causal meal.

Jonathan added: “The space has a single concrete column running up through both floors and an easy, literal treatment of this might have been to create a theme park tree but we abstracted the idea into the rope cladding which wraps up the columns and spirals out across the ceiling like creepers in a forest. Similarly with the idea of dining on a picnic rug in the treehouse, while lovely in concept, was never going to work practically or be attractive to guests. We therefore found a way to evoke that idea without having guests walk all over the surface they sit on, or to have servers have to be serving beautiful food at their ankles.”

For this new concept and menu, Chef Dominique looked to the pastry kitchen and the techniques he and his fellow pastry chefs have honed and worked on perfecting for years, and how they could translate them into a savoury menu and bistro setting. It’s these building blocks of pastry that set the foundation for Dominque Ansel Treehouse which offers small plates, large plates and desserts.

The all-day café on Floral Street is a completely new venture from Chef Dominique Ansel offering a menu that celebrates and showcases the pastry foundations and artisanal techniques that pastry chefs do best. These include flaky pastry, delicate handmade pasta, short crusts for pies and tarts, fresh baked breads and much more. The café also includes a sourdough made using a Levain first started by Chef Dominique in his New York Bakery eight years ago.  By offering this he is able to bring a small piece of home to his new home in London.

Chef Dominique Ansel commented: “When we were conceptualising the idea for Dominque Ansel Treehouse, I thought about how in a traditional restaurant setting the pastry department typically works on all of the different doughs on the menu, even from a savoury perspective. I’m excited to create a new menu that celebrates these pastry foundations and French techniques in a casual bistro with simple, fresh ingredients that stay true to the classics.”

Jonathan said: “This has been an amazing project to work on. With the full support of Dominique and his partner Amy, we have pushed both themselves and ourselves right out of our comfort zones. To take a simple conceptual idea with it as far as we have is like nothing any of us have done before.”