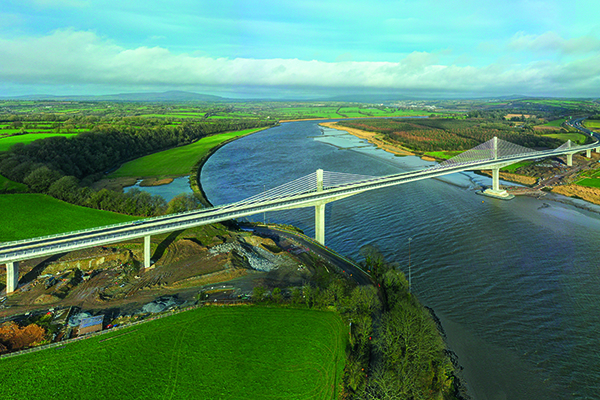 The New Ross bypass scheme was opened to traffic at 10:15AM on Thursday, January 30th 2020. It will significantly ease chronic traffic congestion in New Ross town offering time savings of up to 30 minutes.

Additionally, it will provide efficiencies on the strategic N25 route from Cork to Rosslare Europort while also supporting the future growth and sustainability of New Ross Town and the South East region. The scheme also links the N25 route with the N30 New Ross to Enniscorthy route.

The 15km Bypass Project includes the 887-metre long structure named the Rose Fitzgerald Kennedy Bridge, the longest bridge in Ireland, and its two main spans are the longest post-tensioned concrete spans of their type in the world. The bridge crosses the River Barrow between Wexford and Kilkenny and forms a major part of the €230 million investment in the South East region and was delivered within budget.

The N25 New Ross Bypass, combined with the opening of the M11 Gorey to Enniscorthy motorway in July 2019, improves dramatically the overall connectivity and accessibility of Wexford, Kilkenny and the entire South East Region.

An Taoiseach Leo Varadkar said: “This new bypass, which includes Ireland’s longest bridge, will transform New Ross, Wexford, Kilkenny and the South-East. By reducing congestion and travel-times, improving road safety, and opening up economic opportunities, this will make a huge difference for commuters, for families, for businesses and for tourists.

“As we face the reality of Brexit, this investment in greater connectivity to Rosslare is an investment in our future economic security. This bypass is part of the Project Ireland 2040 story and it’s also about connections. It’s about strengthening connectivity between different parts of our country, and strengthening our communities. Thanks to the hard-work and sacrifices of the people in the South East, backed by investment and the right policies we are seeing a remarkable comeback story for this area.”

The delivery of the N25 New Ross Bypass is the culmination of over 20 years work by Transport Infrastructure Ireland (formerly National Roads Authority), Wexford County Council and Kilkenny County Council as well as technical advisors for the scheme, Mott MacDonald Ireland. Construction works were undertaken by New Ross Joint Venture, consisting of BAM Civil and Dragados. On average, a workforce of 300 people was employed throughout construction and approximately 2.5 million work hours were completed on-site to bring the scheme to fruition.

Speaking at the event great-grandchild of Rose Fitzgerald Kennedy; Rose Katherine Kennedy Townsend said, “This bridge is a wonderful tribute to my great grandmother, and a symbol of her enduring love and lesson that it doesn’t matter who you are, where you come from, we are all God’s children. When some leaders threaten to drive us apart we need to honor those who build bridges that bring us together.”

Cormac O’Rourke Chairman Transport Infrastructure Ireland stated “The N25 New Ross Bypass Project has delivered one of Ireland’s most iconic structures.  This bridge not only spans the River Barrow but also brings the communities of Wexford and Kilkenny closer together”.

Chairman of Kilkenny County Council Peter Cleere said, “The Rose Fitzgerald Kennedy bridge itself is an engineering wonder. It will attract visitors both nationally and internationally just to admire its presence and the engineering skills that it has taken to design and build. I would like to congratulate everyone that has been involved in making this project happen.”

Wexford County Council Chief Executive, Tom Enright said, “The N25 New Ross Bypass is another vital link in the overall connectivity and safer access to and from the South East Region; to and from County Wexford and the town of New Ross in particular. This major infrastructural development will help to attract investment into the Region. The resolution of the chronic traffic congestion in New Ross will result in environmental and quality of life improvements, which will make the historic town a destination of choice. With this significant development, the possibilities and prospects for New Ross, County Wexford and indeed the South East Region are brighter than ever.”

The 35th president of the United States, John F Kennedy’s ancestors hail from Dunganstown, Wexford. The Kennedy Homestead is less than one mile from the new bridge. President Kennedy proudly visited his family town of New Ross in the summer of 1963. The late president’s sister, former US ambassador Jean Kennedy Smith suggested the bridge be named after their mother, in memory of the entire extended family.