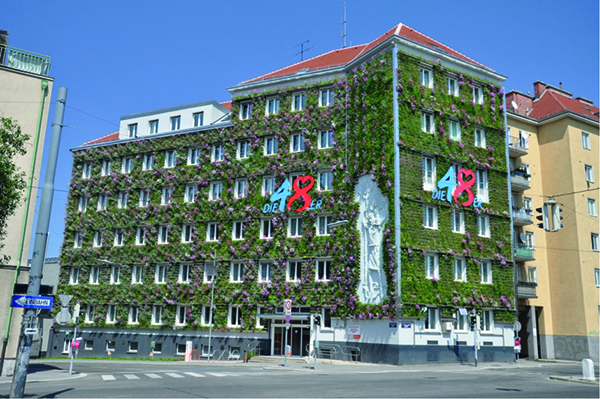 In the last 12 months alone, the climate emergency has penetrated the public consciousness at hitherto unprecedented levels.

Its impact has permeated all levels of human life, with its affect ranging from how individuals deposit their waste to the policies of local, regional and national governments. The construction industry is no exception, where climate change and biodiversity is impacting existing infrastructure and planned developments.

In response, innovative and inventive techniques have been developed to help find solutions that are both practical in the fight against climate change but also easily implementable and aesthetically pleasing.

Particularly in urban areas, green infrastructure has become a go-to choice for architects, developers and designers. This infrastructure is commonly presented as green roofs and green walls.

Greening buildings can be combined very well with technologies such as solar panels or photovoltaics and cause an increase in efficiency.

A green roof is a nature-based solution and always has multiple layers with different functions. Like any roof, the building has to have a waterproof membrane. To ensure that the waterproof layer is not damaged, a protection layer is used. Then a drainage/water storage layer with filter sheet to ensure that the fines in the substrate layer above do not wash out into this layer. Into the substrate, vegetation is planted, seeded or laid.

The benefits of a green roof include increasing the energy efficiency of a building, improving urban air quality, noise reduction, stormwater management and final green roofs provide benefits for biodiversity in the form of increased habitats for wildlife.

An Extensive Green Roof is characterised by its use of vegetation, ranging from sedums to wild flowers. They are typically easy to implement, require less maintenance and are generally not used by people (only for maintenance). They are primarily chosen for their ecological benefits. 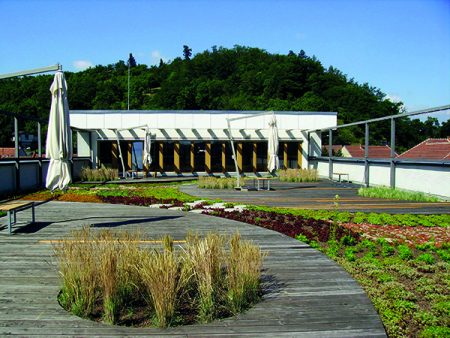 Previously popular solely for their visual aesthetic, green walls are increasingly being chose to improve green credentials, whether that be on an existing structure or in a new build development.

There are different types of green walls systems. Basically, there are ground-based, soil-based and wall-based systems. Depending on the system, climbing plants and planting shrubs, grasses and herbs are used.

For the soil-based system you either can use climbing plants such as Virginia creeper or climber which need climbing plants that require support on a trellis or similar structure. The choice of the trellis depends on the plant’s climbing strategy.

Wall-based green walls are panels of plants, installed in front of the façade with an air circulation system between the existing façade and the green wall. The irrigation and nutrient supply is automatically.

Green walls are recognised to have a positive effect on reducing the Urban Heat Island Effect. They have the ability to bind CO2 and produce oxygen. They also act as an additional part of the thermal insulation; contribute to improved air quality; increased sound insulation; and provide refuges for wildlife in urban areas.

The continued growth of green roofs and green walls is thanks in no small part to the work of organisations such as the European Federation of Green Roof Associations (EFB).

The founding green roof associations of Austria, Germany and Switzerland established the EFB in 1997. Since then the following associations have joined: Belgium, Czech Republic, France, Hungary, Italy, Netherlands, Poland, Portugal, Scandinavia, Spain, Serbia and the United Kingdom. As of 2019 there are 15 member associations in EFB. The Federation and its national members actively promote the use of green roofs and green facades throughout Europe.