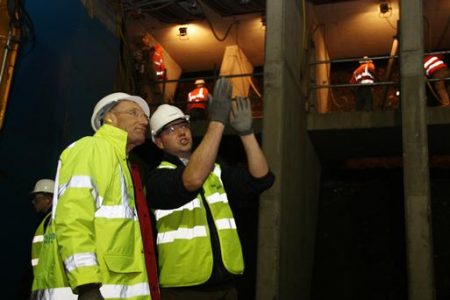 Sir John Armitt CBE, Chairman of the Olympic Delivery Authority (ODA) and former Chair of the Engineering and Physical Sciences Research Council (EPSRC), has been honoured as the first recipient of the Royal Academy of Engineering’s Major Projects Award.

As the engineer responsible for delivering the London 2012 Games infrastructure, he has delivered the massive project on time and to budget while under intense scrutiny from the rest of the world.

The project has consistently met targets throughout the building phase and set new benchmarks for sustainable construction and technical expertise, thanks to Sir John’s leadership in coordinating the work of hundreds of professionals to create new London landmarks. He was pivotal in all aspects of the Olympic and Paralympic Games infrastructure project, including: finance, engineering, environment, management and external relations, as well as acting as an ambassador for the project in explaining its complexities to the public.

“On behalf of EPSRC’s Council, Executive and staff, I’d like to congratulate Sir John on this landmark achievement. The Games and their legacy of world class facilities for the athletes of the future will be a fitting tribute to Sir John and the spirit of 2012.”

Ray O’Rourke KBE, Chairman and Chief Executive of Laing O’Rourke, said: “The success of the London 2012 project hinged on Sir John’s deft leadership and understanding of the delivery requirements for this strategic project. He demonstrated great care in managing the politics surrounding the project and the many stakeholders who had an interest in it.”

Sir John was previously Chair of EPSRC between 2007-2012, was Chief Executive of Network Rail and Railtrack and has extensive experience in the building, civil engineering and industrial construction markets.