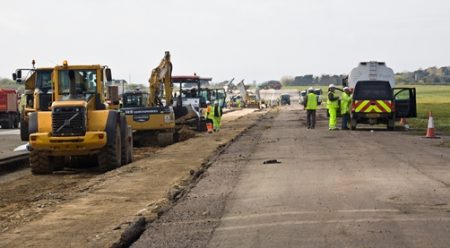 An £80 million refurbishment project is currently underway at Guernsey Airport.

The scheme comprises a programme of essential refurbishment works and improvements and is being implemented by States of Guernsey. Work includes the resurfacing of the runway and taxiways, the reconstruction of parking aprons for use by aircraft, the replacement of airfield lights (including approach lights and runway lights) and the installation of key operational systems. A brand new drainage system will also be installed on the site to replace an existing system.

Work began on project in October 2011. Lagan Construction is the main contractor on the project and RPS Planning & Development is the designer and project manager. TPS Schal has been appointed as client project manager.

The facility will remain open to the public throughout the project, with the exception of four two-day closures outside peak travel times, so all operations are scheduled to work around ongoing services.

Work on the runway, taxiways and key operational systems will take place after the airport shuts each night, and will be reinstated ready to reopen the following morning. Work on other elements, including the reconstruction of parking aprons will be carried out during the day.

“The current hard surface runway at Guernsey Airport was built in the late 1950s and came into operation in 1960. It was resurfaced in 1974, and since then has undergone routine maintenance and repair, but that was the last time any work on this scale was carried out on the runway. The concrete aprons are even older in places.

“The surface has lasted well, certainly much longer than would have been expected at the time. However it is inevitable that when you have several hundred tonnes of aircraft landing and taking off on the runway on a daily basis it is going to deteriorate over time. Looking at the patchwork of repairs to the aprons it is also obvious that those surfaces have reached the end of their useful life, as has the drainage system and lighting.

“Whilst addressing the maintenance requirements, we also had to look at the other provisions at the airfield. These included runoff safety around the runway and at either end of the airfield. We are having to improve these and are doing that by creating a new section 120 metres of runway, effectively moving it to the west to accommodate the longer safety areas to maintain the existing length.

“We are also improving the profile of the runway, which has a noticeable dip towards the western end and carrying out extensive earthworks.”

“Work is currently on schedule and on programme and we are pleased with the work we have conducted so far at the Airport.

Logistically we encounter different challenges on this site than we would on a site in the UK mainland, but we are used to working across a range of diverse locations and we are experienced in completing projects like this. We are also exporting a number of materials from the UK, including aggregate which we have shipped in from a quarry.

“It is great for Lagan Construction to be involved in a large scale project like this and once completed these improvements will be great for Guernsey Airport.”

Construction work on Guernsey Airport is scheduled for completion in the autumn of 2013.