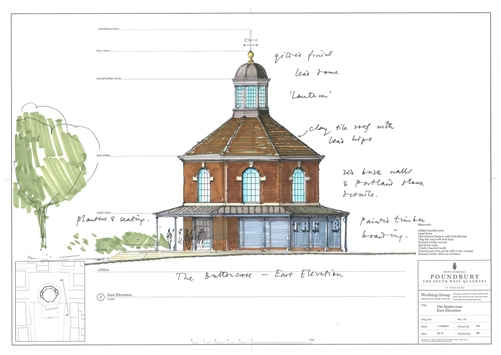 Adhering to the strict architectural and design ideals of Prince Charles, construction on Poundbury began in 1994.

Situated on Duchy of Cornwall land, the new town has come a long way since that first brick was laid – it is now a buzzing urban centre, home to 2,000 people and 140 businesses. Made up of town houses, cottages, shops and light industry, the town boasts a combination of traditional architecture and modern town planning in which people can work and live in close proximity.

Many people make a visit to Poundbury a must whilst they are on holiday along the Dorset stretch of the Jurassic Coast. As a mark of confidence in Poundbury’s growth the Duchy of Cornwall have recently embarked on an ambitious new build in the town centre worth over £400,000.

Work began on the Buttercross earlier this year and the building is expected to be completed by March 2013.

On the project, Peter James who is the project manager for the Duchy of Cornwall at Poundbury said:

“The building is hexagonally shaped and is a very tall structure, allowing for a lot of open space. It has traditional foundations, external brick work and internal bare faced concrete block. There is also exterior seating and within the seating area there is some nice landscaping.

“The only problem that we have really had with the project so far is with the weather, the rain has hindered progress somewhat.”

On the Duchy of Cornwall’s developments, Peter added:

“We are doing between £20 and £30million worth of work here every year, so it is a huge investment. So the Buttercross is quite a small part of our work, but every small part goes up to make an important development. You know, every part of the jig saw is important – that’s the key to Poundbury, it has all got to fit together.”

A unique element of the build has been the construction of an anaerobic digestion plant, which will be used to power the Buttercross building. The plant which is one of the first to be used in the UK, converts the waste gases produced from the breakdown of biodegradable materials by bacteria into a renewable source of energy. 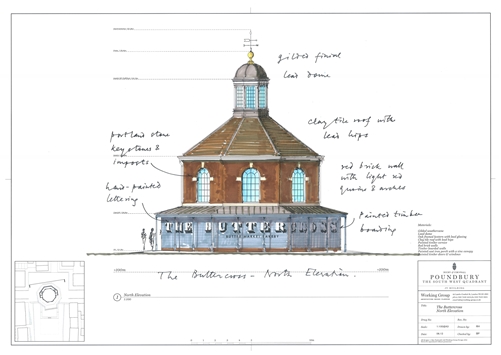 Once complete an agreement has been made to rent the building out to a business local to the South West region called Town Mill Bakery. The proprietor of which is Clive Cobb, who runs similar venues in Lime Regis, Plymouth and at the Eden Project.

Town Mill Bakery’s motto is ‘a place to gather’ and the cafe will offer traditional breakfast, lunch, dinner and supper using local produce.

The building itself is adjoining another Duchy of Cornwall development called the Butter Market which when complete will be a collection of shops, adding more to the cosmopolitan feel of the town.

The main contractor on the build is JV building and the architect behind the design was Ben Pentreath from the Working Group. 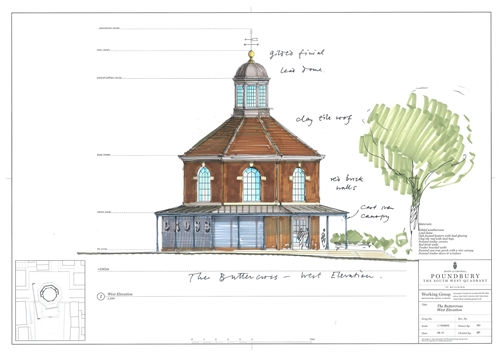 Founded by Ben in 2004, the Working Group specialises in traditional architectural design and planning.

Best known for traditional designs, the firm also enjoys working in a more contemporary idiom where it is appropriate for the site or client. In this case the traditional outlook of the company has fitted the character of Poundberry as the initial drawings see Buttercross fitting the town with ease.