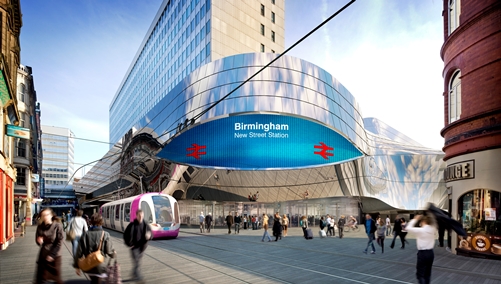 A multi-million pound project to give one of the UK’s busiest train stations a much needed makeover is underway.

Known as Birmingham Gateway, the project involves the redevelopment of Birmingham New Street Station, along with the transformation of connected shopping centre the Pallasades. The site is being reworked to update and improve the station in order to deliver a modern, 21st Century station which will become a focal point for the city.

The design for the new station was the result of an international competition and includes a fantastic new facade and a grand concourse which is three and a half times larger than the current atrium. Meanwhile, the Pallasades – which is to be renamed Grand Central Birmingham – will boast 40 new premium fashion and lifestyle stores, more than 15 eateries and a brand new John Lewis department store.

The implementation of an improved train station and retail space will bring a number of benefits to the city, including the creation of up to 1000 new jobs. In addition, the completion of the upgrade to the West Coast Main Line has seen an increase in passengers, which has subsequently decreased traffic in the area.

Throughout the entire programme of works on Birmingham Gateway, New Street Station remains open to the public. In order to facilitate the redevelopment work, only one platform is closed at any one time so that the station can continue to run a full train service.

A planning application for Birmingham Gateway was submitted in spring 2011, and the project is currently on course to reach completion in 2015. At present 1000 workers are currently working on the site, 24 hours a day, 7 days a week.

International consultancy and construction company Mace is the main contractor on Birmingham Gateway, whilst Atkins is providing architectural services. Irvine Whitlock is implementing the masonry package on the project, which includes the new entrance, perimeter walls, lift shafts and corridors.

“We have been involved with the project since 2011 and will remain on site for the next two years. Although we were contracted to undertake masonry work on the Birmingham Gateway project we are also involved with a number of other aspects of the site.

“One of our subcontractors, Watermark Systems UK is working on the secondary steel work and all of the teams are working well together.”

“At Irvine Whitlock we specialise in many high profile projects such as this and the Birmingham Gateway is another fantastic project to be associated with. The project is challenging, but everyone involved is doing a great job!”

Birmingham New Street Station is the UK’s busiest train station outside of London and the busiest interchange station in the country, with a train leaving platforms every 37 seconds. The original New Street Station opened in June 1854, before it was expanded in 1885 and demolished in 1964 to make way for the current station which was built in 1967.

The Birmingham Gateway Project is a registered site with the Considerate Contractors Scheme (CCS). For more information about the project please visit: www.newstreetnewstart.com.