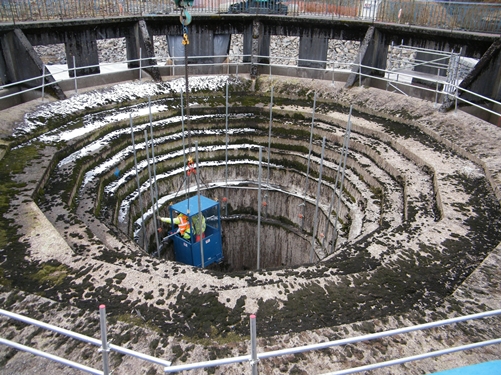 Scottish Water has embarked on a £5.5million project to raise the height of the dam at its Black Esk Reservoir in Dumfries and Galloway.

Led by contractors Black & Veatch, the works to raise the dam by 2.5m will greatly increase the capacity of the reservoir significantly, delivering  a more secure and consistent supply of water even during dry spells.

Local Councillor Craig Peacock said: “This is a major project to protect future water supplies to the area and is a welcome investment from Scottish Water.

“The engineering needed to complete the project is fascinating and I look forward to a return visit to Black Esk to see works progressing, especially the new piano key weir. This investment into our area can only improve the utilities needed for our residents and has to be a good thing for the people of Annandale & Eskdale.

“This project will significantly improve the security of the water supply from the Black Esk Reservoir. This will further enhance our ability to deliver water to customers in times of low rainfall.

“We will be raising the crest of the dam by 2.5m, using clay which exists on site – cutting down on cost and traffic. The project also involves raising the existing spillway weir. The spillway is an unusual design which sits inside the body of the reservoir and to the casual observer has the appearance of a large plughole.

“To raise the level of this we are installing a circular ‘piano key’ extension to the weir which consists of 24 pieces of cast concrete, each the size of a portacabin. This is a world-first as far as we know – we have visited France to research these types of weirs and to our knowledge they are always in a straight line and not circular. 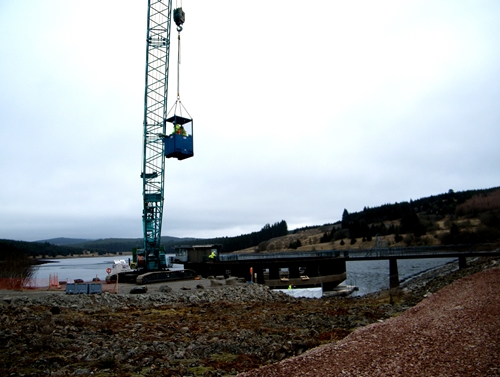 “We are demolishing part of the existing structure and recycling the steel and concrete. The concrete will be used as a sub-base for improvements we are making to the Forestry Commission road nearby. The steel will be taken off-site.

“Other works include raising the valve tower and replacing the bridge to the tower, a forestry road diversion, landscaping works and installing new valves.

“These improvements will have little impact on the local communities; work will take place during daylight hours, and should not impact on any businesses. Completion of the project is due around early 2014.”

“The Black Esk water treatment works is a key asset for Scottish Water in Dumfries and Galloway. The facility serves a population of around 48,000 in Lockerbie and surrounding areas, and has already seen substantial investment and improvements by Scottish Water in the last few years.

“We’re committed to making sure the people in the area receive the best possible service. We have a number of water main replacement projects that are on the ground across Annandale and Eskdale which are replacing ageing cast iron and cement mains with modern plastic pipes. 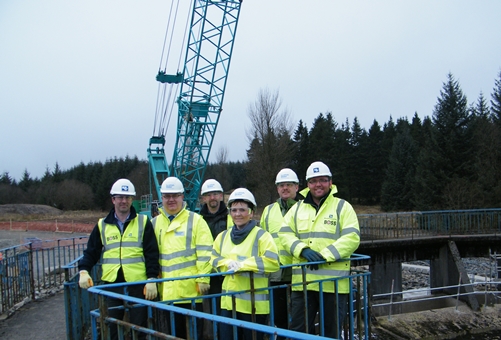 “We are renewing a key water main in Gretna that will improve pressure and capacity in the network, which improves the desirability of the area for developers and increases the level of service for existing residents.”

Scottish Water is also upgrading water mains in the area throughout 2013 and possibly into 2014. This work will see £2.4m of improvements carried out to around 32km of water mains to improve the stability of supply and water quality. This work will benefit many  local towns and villages, including Canonbie, Shieldhill, Hightae and St Ann’s.

In 2010 an £8.9million drinking water project at Black Esk was completed. This work upgraded the treatment process, enhancing the water supply to the area.

Local people who have any questions can get more information by calling Scottish Water’s Customer Helpline on 0845 601 8855 and quoting “Black Esk dam raising project”.

Coastworks is a marine plant hire company which specialises in road transportable working platforms for construction companies. The company supplies working platforms, crane barges, excavator barges and workboats that suit a variety of construction projects and in addition the company undertakes dredging contracts at sea or on inland waterways.

When Coastworks were first approached by Black and Veatch the company were tasked with providing a fully adaptable working platform which could be installed around the overflow and valve tower on Blackesk Reservoir. Although the design of the valve tower is fairly straight forward, the overflow structure is quite unusual and Coastworks had to factor into the design the considerable rise and fall of the water level in the reservoir.

Black and Veatch were looking for a stable platform from which they could work from, cutting concrete, working from scaffolding and generally allowing the workforce to access all areas. Coastwork’s modular pontoon system seemed like the ideal solution as it allowed the company to install in relatively hard to access areas, to be built to any desired design and provide considerable buoyancy and stability. This fully road transportable system is a very cost effective solution to working on reservoirs and relatively remote locations such as Blackesk.

“The design and install of the pontoons at Blackesk was certainly challenging and installing the pontoons to create access to the maximum number of areas, allowing for the water level fluctuations involved adapting the system to its maximum tolerance. After installation it was great to see the entire structure becoming accessible to the workforce and we were delighted to hear that even after some considerable snow melt and a substantial rise in water levels the pontoon coped admirably. Having spoken with the ‘men on the ground’ who are actually working on the pontoons we were extremely pleased to hear their positive feedback on how much they valued the pontoon system.”

“Black and Veatch are also working on another reservoir, near Lockerbie, and here we were asked to supply a fully road transportable steel working platform from which excavators and cranes could work from. We supplied our CW-5 mexeflote barge which was used to remove granite blocks, pour concrete, erect scaffolding upon and lift a bridge from between the dam and the valve tower. This modular steel barge has been reconfigured to carry out a range of tasks throughout the duration of this job. It is a very adaptable platform and can be configured to support up to 10t per section.”