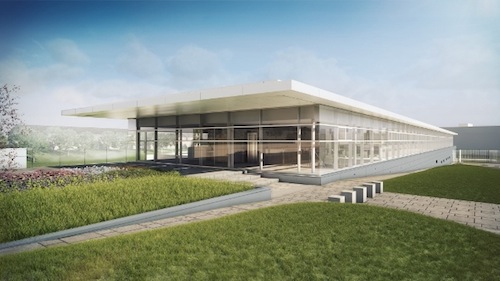 With the completion of the base of the building, the Ryder-designed £11.2million 4,518 sqm, new Police Scotland facility at Kitty Brewster is progressing towards its planned handover early next year.

The facility, designed and built through the public and private partnership hub North Scotland, will comprise a state of the art 60 cell custody facility, a virtual court, an identity parade suite, a community policing team and supporting office accommodation.

2 km north of Aberdeen city centre, the linear site was derelict brownfield land, formerly a depot for Scottish Water, and splits into two distinct levels. The northern half of the site falls 2m from its highest level before there is an abrupt drop of approximately 6m to the lower part to the south. Utilising these existing upper and lower levels of the site to create separate entrance points for custody and office accommodation, the secure elements of the custody facility can be housed all on one lower level.

With a clearly identifiable main entrance plaza, the building will follow a simple organisational arrangement. The lower level custody facility will be clad in high quality precast concrete panels and will appear to merge into the landscape by the use of sedum roofs. In contrast, the single storey, light, glazed non secure ancillary office and support accommodation above, will be the visible face of the building and will be accessed directly from the upper parking area.

The project is due for completion and occupation by early 2014.