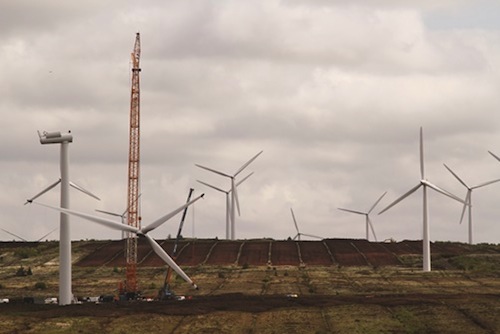 Set to power around 35,000 homes, all of the twenty 2.3MW turbines are now erected and the majority of the civil and electrical works are to be completed this month.

“This site was chosen because of its high wind yield and it will also form part of a wider cluster, which is one of the largest in Northern Ireland, producing around 76MW.” Kevin was referring to SSE’s wider Slieve Kirk wind farm cluster in County Derry/Londonderry.

“Previous to this development the site had been used primarily for sheep farming so it was a significant undertaking”, Kevin said. “On Phase One, work progressed well, however on Phase Two the ground conditions were quite challenging; it took good planning and project management to overcome them.

“It’s been a fast moving and dynamic project because we had tight timelines, as you can imagine therefore the teamwork element and trust element has been huge, you have several companies working at once so cooperation is critical.”

The Glenconway project has been underway since May 2012 and has involved the construction of access tracks, twenty wind turbine foundations, a meteorological mast, a control building and twenty wind turbines. The development saw 400 cubes of concrete and 55 tonnes of steel used in addition to 450 people being employed over the lifetime of the project, working a total of 140,000 hours.

Speaking about the wider impact of the project, Paul Whelan, SSE’s Safety & Environment Manager said: “We worked an awful lot with the stakeholders in the community. The footprint for a site like Glenconway extends 20-30miles; to date we have had several hundred local people employed onsite and nearly 50 local businesses have undertaken work.

“A lot of the materials are also from the local area, all the stone has been quarried locally so the economic benefits have been huge for the area.”

Kevin added: “We’re harnessing a natural resource in a very environmentally friendly manner, it benefits the community an awful lot more than a lot of people realize.”

Employing 18,500 people across the UK, including 900 in Ireland, SSE owns over 13,000 megawatts of electricity generation capacity, distributes electricity to 3.5 million homes and workplaces and supplies electricity, gas and other services to almost 10 million customers. The company is Ireland’s second largest energy provider, supplying over 800,000 electricity and gas customers, and is the third largest generation capacity owner on the island with 1,531MW (around 13% of installed capacity) in operation.

SSE is a leading electricity and gas company, operating mainly in the UK and Ireland. SSE is the broadest based energy company in the UK, with interests in a variety of energy sectors and has assets and projects from Abernedd to Walney.

The UK’s positioning in the world enables it to be an ideal location for using renewable energy- setting up wind farms has proved to be the most common way of getting energy from the wind and ultimately carrying out this energy recycling exercise.

When they were initially introduced wind farms were an expensive development, however initial costs have fallen making wind farms, and ultimately electricity supplies, cheaper. Wind farms allow electricity to be produced in an environmentally friendly way as they do not produce radioactive or chemical emissions.

The number of wind farms across the UK is steadily increasing and the impact on this growing industry will hopefully mean a continuous decline in electricity costs for the population.

Meanwhile, a more recent project for SSE is Foyers hydro power station, a longstanding facility which has been in operation since 1896. At present, SSE are undertaking an £8 million refurbishment programme which will see three key components – which have reached their operational life – replaced.

“Replacing these components will help to ensure the continued safe, reliable and efficient long-trm operation of Foyers power station. The new modern components will serve the power station for decades to help maximize its availability to generate hydro-powered electricity.”

SSE is the UK’s fourth largest telecoms network company and has approximately 130,000km of overhead electricity lines and underground cables; supplying power to around 3.7 million homes, offices and businesses. In addition, SSE has a 50% share of Scotia Gas Networks, has around 10 million customer accounts for electricity, gas and other home services and has the UK’s largest onshore gas storage facility.

SSE’s first commitment is always to the community and the wider environment. The company ensures that all energy supplies are safe and reliable and SSE strive to provide practical support that brings lasting benefits to the community. SSE has established a new community investment policy if planned wind farms get the go ahead then the company expects to invest more than £240 million in local and regional community projects.

Education is also a key focus of SSE’s ethos, ensuring that the next generation is clued up to the importance of taking responsibility for the wider community. SSE has dedicated pages on its website, which aim to inform and educate everyone, from parents to children.