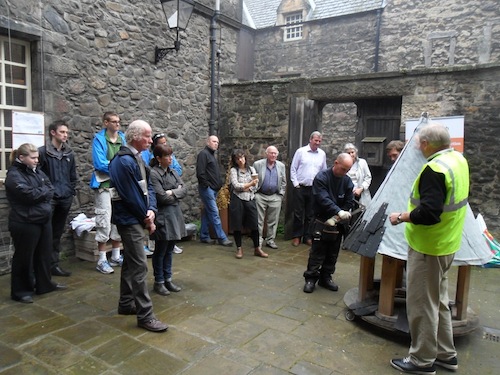 The Edinburgh Fringe is best known for its comedy, theatre performances and avant-garde art shows. However it is now starting to be recognised amongst the heritage circuit for the Edinburgh Traditional Building Festival.

On the 20th-22nd August, the second Traditional Building Festival took place at Edinburgh World Heritage Offices and was heralded as, once again, highly successful and extremely well received by the public.

Numerous demonstrations, talks and tours were laid on for free over the three days organised by the Edinburgh Traditional Forum. The National Federation of Roofing Contractors (NFRC) is part of the Forum and put on lead and slate roofing demonstrations.

The aim of the event is to celebrate Edinburgh’s traditional buildings, and the materials and skills used to maintain them, to inspire for future generations. It is funded by NFRC, the Stone Federation of Great Britain, and the Construction Industry Training Board with support from Edinburgh College, Historic Scotland and Edinburgh World Heritage.

The 2013 Festival has left behind an unmistakeable legacy. With this in mind we wait with baited breath for its return in 2014!