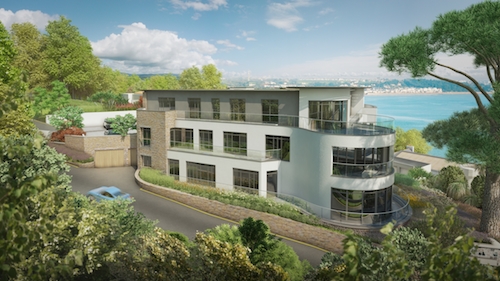 A development of nine apartments in Jersey will be completed in August 2014. Work on the apartment block began in May 2013.

The planning application process was not an easy task and in total took seven months from submission to approval.

“The site is well known locally and has had a chequered history; it used to be a hotel which was partly destroyed by a serious fire back in 2010. The site also had two previous planning applications for redevelopment refused over the past 6 years. Our client approached us back in mid 2011 to ask us for our views on obtaining a successful and deliverable planning permission for the site. 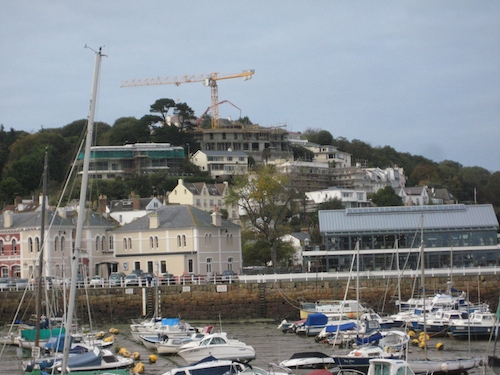 “So we flew over to the Channel Islands, in order to visit the site and meet with the planners to understand why the two previous planning applications had failed.

“After seven months of careful planning and presenting our scheme to the Design Commission in Jersey we finally achieved planning approval in May 2012. The planning approval was for nine bespoke luxury apartments that ranged between 2000 and 3000 square feet.”

Aaron feels that the apartments are a unique product for Jersey because most apartments in the area are only up to 1800ft2 in size. Most people tend to buy two apartments and knock them into one if they require a large apartment. 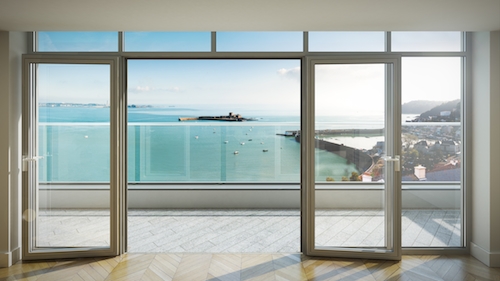 The nine apartments are being comprehensively fitted out with Rational kitchens from Germany, Staron work surfaces and Miele integrated appliances. The luxurious bathrooms will have Villeroy and Boch sanitary ware with Hans Grohe chrome fittings. The fitting out of the interior will continue with the use of solid wood floors to the living areas and bathrooms.

All of the apartments each boast extensive balconies with glass balustrading. The balconies offer views over the coast across into St Helier and down into St Aubins habour.

Aaron said that the building has been designed to maximise the amazing costal views. All of the entrances into each of the apartments are via the central internal courtyard. Moving the entrances/canopies from the external facades helps us to reduce the extent of external clutter to the exterior of the building. Therefore when each prospective owner walks through each apartment they are greeted by the impressive coastal views offered by the unique location of the site 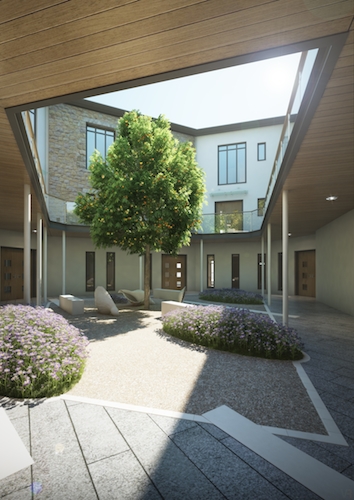 There are two parking areas on site offering two parking spaces per apartment. The car park is linked to the internal courtyard which has been creatively landscaped around a central bronze sculpture

With regards to work on site so far, Aaron commented:

“Work is going really well so far considering the constraints of the site. The concrete frame is up and contractors Camerons hope to have the building shell weather tight by Christmas. From January onwards work will begin on the external facade treatments and the interior fit out.

“Upon completion here will be huge benefits to the local area. The site is very prominent and before this development it was seen as an eyesore on the horizon of St Aubins. The shape of the curved facade elegantly provides an offset around the protected Monterey Pines trees which are a well known local feature of the site

Aaron said the project had been a great challenge for Roberts Limbrick, and that one of the most rewarding parts of the project was the outcome of the public consultation which we undertook whilst the scheme was being developed. The previously refused schemes each received between 50-60 letters of objections. Taking the time to explain and discuss our initial design thoughts with the public helped answer their initial concerns which resulted in only one letter of objection being received during the planning consultation process. 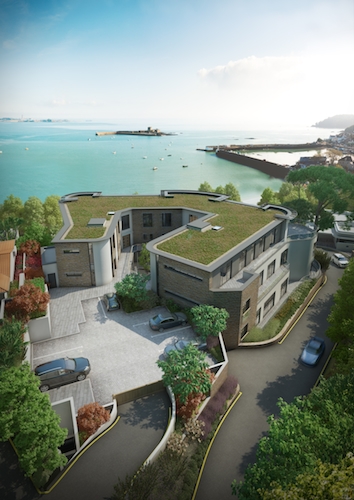 The public have been extremely supportive of the project during both the planning application and especially now that the building form is emerging from the site. The expected completion date is August 2014.