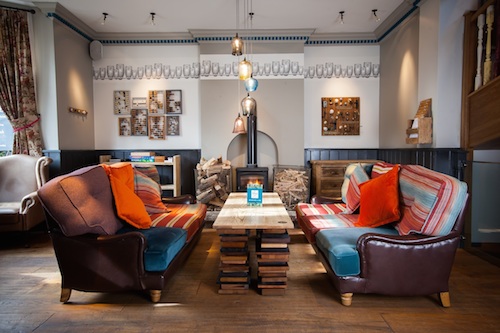 The Village, a newly launched pub in Moseley, Birmingham, was nominated during the early stages of this year’s Restaurant and Bar Design Awards.

Although the pub didn’t make the shortlist, interior designers Spencer Swinden and owners Suburban Inns have still transformed the venue into something special.

Premier Hospitality caught up with Melony Spencer of Spencer Swinden, to find out more:

“The demographic was bohemian yet affluent. We always design with the customer in mind so we had to create something with identity that they’d love. And in this case creating something high-end didn’t mean creating something modern. There are traditional pubs and modern bars that serve as local competition, so we had to create something alternative that would appeal to customer’s aesthetic and add a new dimension to Moseley.”

The building was built in 1894 as a Victorian Gentleman’s Club and was extremely run down at the start of the project. The redesign took inspiration from the Victorian structure and restored the building’s best features, while Mel went to work to create some captivating character, which became a ‘Quirky Victoriana’, with rustic charm and vintage details dotted in every direction.

A major part of the project was the renovation of the roof. Spencer Swinden took the step to remove the false ceiling, along with the false interior walls and columns, to create an open space and to restore the roof to its former glory with an ornate tiled effect. This gave a more palatial feeling, which creates real impact with new customers.

The 90’s built toilets were demolished to make way for a crackling wood burning fire. A staircase was designed and the toilets were relocated to the first floor, a trip to which is an enthralling experience in of itself, from a chandelier of hanging torches, to a wall decorated with a collection of antique vanity hand mirrors.

Mel said: “Bohemians love to discover spaces like this with eclectic wondrous oddities, and I love to see people marvelling at what they find; it’s another element that helps to make the place unique and special. For the customers it’s always the little details which create something worth talking about. They all add a touch of vibrant soul, which leaves a lasting impression.”

A plethora of re-used and up-cycled materials have been used throughout including reclaimed timber. There is a new dental cornice which had an elaborate paint detail, whilst the bar is Victorian styled with a dropped bulkhead, supporting cantilevered globe lights.

Lighting is an important aspect, with handmade chandeliers created from bike chains and old penny-farthing wheels. Handmade glass light pendants adorn the venue, as does vintage bric-a-brac, some cheeky flying ducks and some old bicycles.

The main contractor was Belfords, who worked alongside the designers. Spencer Swinden also designed the menu, food specials, and implementation of remote food ordering. They wanted to create not just a majestic gastro pub, but also an experience that’s laid-back and interesting and a place where you want to bring friends.

The venue opened in November 2013 at a cost of £800,000 and is the brainchild of entrepreneurs Adrian and Sharon Harvey. The husband and wife team want The Village to be the first venture of many to launch in the Birmingham area.

Spencer Swinden Design Ltd was set up in 2008 by Melony Spencer and Martin Swinden and is based in Birmingham’s Jewellery Quarter. The business designs and consults for pubs, clubs, restaurants and hotels.

Their approach is to get to know a business inside out, to find out about the customers, the competition, and to get a profile of what makes the customer tick. This helps to create a design concept with a flawless rationale. They work with clients and carefully selected partners through design, build and fit-out, to ensure the initial brand concept is realised and to provide expert care and consultancy through the launch and way beyond.

“We won the ‘Best Bar and Restaurant Design Award’ for our transformation of The Plough at Harborne, Birmingham. Since then the venue’s turnover has quadrupled.We always have fun in the work we do, and I’m delighted our creativity and vision can make customers so happy and make such incredible difference to sales.”