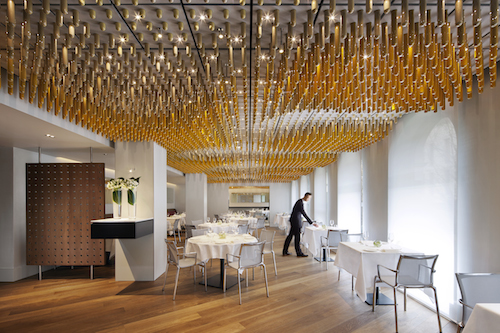 Ametsa with Arzak Instruction is a Michelin Star Spanish restaurant located at The Halkin by COMO in London’s Belgravia.

The restaurant is the first Ametsa to arrive in the UK and opened its doors in March 2014.

Work began on creating the new restaurant in November 2013, with Atlas as the main contractor. Ab Rogers was the interior design practice on the restaurant and was appointed due to an existing association with the hotel group.

“The Ametsa brand originates from San Sebastián, a place which has more Michelin star restaurants in it than anywhere else in the world. The brand’s chefs are fascinated by tastes and flavours and they use thousands of spices within their cooking to create the perfect dishes.

“Christina Ong of Como Hotel Group partnered with Ametsa to bring the offering to London, thus creating the first international Ametsa restaurant in the UK. Christina approached us about the interior design to give it an energy and life, whilst echoing the ethos of the food through the interiors.”

“The restaurant is an intimate space, with 40-covers and an extendable private dining room which is opened up during busy periods. So our aim was to create something which could cause an impact and speak about the food, all whilst remaining within a contained space.”

A standout feature of the restaurant is the spiced ceiling, which was created utilising 7,000 spice containers. The containers were suspended from the ceiling and are a quirky touch which reflects the Ametsa style of cooking.

“A big challenge we faced was how to work around the acoustics within the space, so we used this hanging artwork as a way to absorb the sound. The ceiling supplies, light and decoration, yet at the same time removes all the unwanted sounds, so guests can clearly hear what is being said at their table and not what is being said on all the other tables.”

Working on a restaurant like this has been a great opportunity for Ab and one which has allowed his team to create something a little bit different in the city.

“We love food and we love working with interesting people such as Christina Ong and Ametsa, who have some of the greatest chefs in the world. It is such a privilege to work with such great minds and create something which is unique and nurtures the food.”