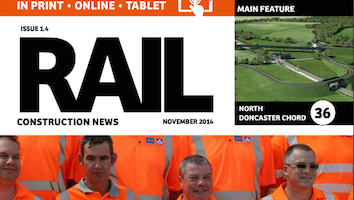 Dear readers, Welcome to the latest edition of Rail Construction News – the premier construction tool for the rail industry […]

In this month’s issue we take a look at the redevelopment of Reading Station and keep up with the latest developments with Crossrail at Paddington New Yard. In this issue we also cast our eyes over the recent National Rail Awards 2014, including Waverley Station which picked up the prestigious Project of the Year Award.

The redevelopment of Reading Station has now been completed; however works to refurbish and improve the surrounding areas are due to complete in spring 2015. The Network Rail project began in 2010 and was officially opened in July this year by Her Majesty The Queen in a momentous opening ceremony.

“The point of the project is to unblock the bottle neck at Reading; the first stage of this scheme was to construct a new station with a bigger capacity before undertaking the other elements due to complete next year.”

Meanwhile, work is currently taking place on the Network Rail-owned Paddington New Yard site. Prior to the arrival of Crossrail, the Paddington New Yard site was utilised as a maintenance and overnight bus stabling space. As part of the project a replacement elevated bus deck facility, able to accommodate 150 buses will be created, in addition to the installation of a new concrete batching factory. Work began on the project in December 2013, with construction taking place in April 2014.

And finally, The National Rail Awards 2014 – which took place on Thursday 18th September – was a celebration of the rail industry, rewarding those who have made a huge difference to the railway network. The event was a huge success and not only did it see a plethora of leading names take to the stage to collect awards, it also demonstrated the commitment that is being made to improving railways.

Chairman of the Judges for the National Rail Awards, John Swift QC, said:

“What is remarkable about the railway, and the reason why it has been such an extraordinary success story in recent years, is the sheer dedication of railway people to serve the passengers and the freight users with passion.”