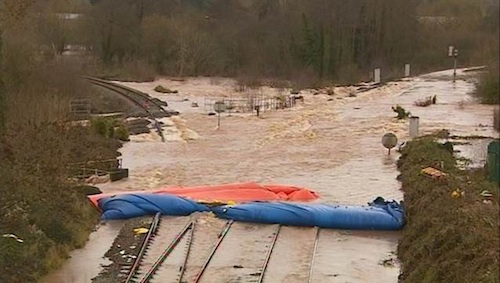 Network Rail has announced its preferred solution for tackling the problem of continual flooding at Cowley and Stafford bridges in Exeter.

This solution involves the removal of three weirs close to the bridges to lower the water level in this part of the River Exe.

Flooding at these bridges is a long-standing problem that has had a devastating impact on the nearby railway line and on the local community. In total, it has resulted in four weeks of disruption over the last two years, meaning numerous delays and closures on the Great Western Main Line; loss of profit for businesses in the area; and a huge inconvenience to local residents.

Over the last year, Network Rail has been working to find a long-term solution to these problems. The solution of removing Pynes, Exwick and Cowley weirs was chosen as the most preferable because it would provide the highest return on investment when the extent to which it could prevent further flooding was compared to its cost. Once the three weirs are removed, the river will be returned to its natural state, meaning that in this part the water level will fall by up to a metre.

“Over the years, flooding at these two bridges has caused huge disruption on the Great Western Main Line, severely inconveniencing passengers and harming the region’s economy. As a good neighbour, we are also aware of the extensive problems it causes the local community, which is why we have been working to find a long-term solution.

“The preferred option of removing the weirs is the most favourable as it would not only limit the chances of flooding in the future, it is also the option that provides good value for money for the public.

“We are pleased to support Network Rail’s work to improve the railway’s resilience to flooding.”