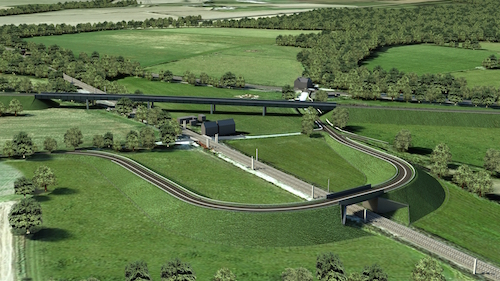 The North Doncaster Chord project in Yorkshire has been completed having successfully reached its aim of freeing up space on the East Coast Main Line.

Network Rail commissioned the project to construct a new railway flyover at Shaftholme, to the north of Doncaster, in order to take freight trains up and over the busy East Coast Main Line, rather than across it, freeing space for much needed additional passenger services.

Part of this project also included the closure of the Joan Croft level crossing and its replacement with a new road bridge to make both the railway and road safer and free from delays. The £45 million project was appointed to principal contractor, Morgan Sindall, in October 2011 who has worked alongside Network Rail and designers URS to bring the scheme to life.

Premier Rail News caught up with Adrian Elliott, from Network Rail, who acted as the Programme Manager to find out more about the scheme. He commented:

“The North Doncaster Chord is just a small part of a larger programme of work, carried out by Network Rail, which attempts to increase capacity on the East Coast Main Line. Increasing capacity has been one of our focuses for the past few years. For me it was a great opportunity and I really enjoyed the work. We were working in an alliance with Morgan Sindall and I acted as the Alliance Manager enabling me to work with a totally integrated team on site. It was great to see how the contractors work.”

During 2012 Network Rail worked with project designers, URX, before moving the project to site in January 2013. The on site team did encounter a number of unforeseen challenges that affected the smooth running of the scheme, one of which was unforeseen ground conditions.

The Great Crested Newt also posed a challenge to the project; as the newts were not caught prior to their hibernation period so Network Rail had to alter the logistics programme in order not to disturb the creatures. Certain parts of the site were restricted whilst the newts were hibernating and so the team had to transport materials to site via a different route.

In 2013 the major Doncaster-Thorne railway line which connects South Yorkshire to the Humber ports and Scunthorpe was blocked by a landslip at the colliery spoil for around six months. This posed another huge issue to the North Doncaster Chord project meaning the team once again had to rearrange another route to get materials on site.

The project has not only enabled more trains to run on the line; allowing freight trains to deliver their cargo with less hassle, but has also increased the ability of the rail network to transport goods in a more environmentally sustainable ways.

Freight trains travelling between Humber ports and the Aire Valley power stations previously ran on the East Coast Main Line for up to 14 miles. The project has now separated freight and passenger trains and so has increased capacity and improved the reliability of both services.

The ECML improvement programme is a wider project being run by Network Rail to improve capacity and reliability on the East Coast Main Line between 2009 and 2019. The £600m programme includes new sections of track, platforms and stations, which will help deliver faster, more frequent services.

GB Railfreight was the first operator to officially use the newly-constructed North Doncaster Chord in July this year. The 3.2 kilometre double track chord links the Skellow and Askern lines and as full capacity is expected to carry around 30 coal trains each day.

The centrepiece of the project is a 246 metre long six-span viaduct at Shaftholme which connects the Grimsby–Doncaster and Doncaster–Knottingley lines.

“We specialise in weed control and de-vegetation and have been in operation for 45 years. This project was important for us to be involved with as it was a high profile local project. We pride ourselves on the quality of works.”

Morgan Sindall has won a £20m contract from Network Rail to work on the North Doncaster Chord project. Morgan Sindall is a successful construction and regeneration group employing around 5,700 people, working on everything from small scale fit outs and utilities projects to major urban regeneration schemes. From Construction and Infrastructure to Fit Out, Affordable Housing, Urban Regeneration and Investments, the firm delivers complex projects that create a real difference.

Brenbuild Ltd is a civil engineering company, specialising in Reinforced Concrete Structures. Established in Scunthorpe, North Lincolnshire, the company has been in operation for eight years and carries out a wide range of contracts nationwide.

Recent projects for Brenbuild Ltd include the construction of a large road bridge over the East Coast Mainline on White Rose Way, Doncaster for Balfour Beatty and the Leeds Southern Entrance project for Carillion. Most recently, Brenbuild Ltd has been involved with the North Doncaster Chord project, where the team were responsible for the construction of a 300m viaduct, an over bridge and an underpass, again next to and along the infamous East Coast Mainline.

“We regard ourselves as one of the leading companies in the country for this type of work. Our close working relationship with RMD Kwikform (Haydock) enables Brenbuild to produce professional, safe and buildable solutions to the projects we have and are currently working on.”

“At Brenbuild Ltd we pride ourselves on being ‘the’ flexible contractor.”

Freyssinet Ltd specialise in the design, supply and installation of structural repair works. The company has been in operation for more than 50 years, with services including concrete repairs, cathodic protection, bearing replacement, carbon fibre installation, hydro-demolition, jacking works, high tensile bar installations and much more.

“Being involved at the beginning of a project ensures the correct decisions are made at an early stage, including the interpretation of the bearing information and the ability to influence the installation.”

“We pride ourselves in finding the correct solution to any number of complex issues. Where we are able to influence the design criteria we are able to bring solid engineering principles in to play while at the same time ensuring that a high level of practicality is maintained at all times.”

Lineside Structure Maintenance Ltd are civil engineers by trade, specialising in brickwork repair works to bridges, tunnels and culverts, as well as level crossing replacements and vegetation management. Having been in operation for 17 years the firm have established an impressive portfolio working with an array of high profile clients.

“Lineside were responsible for site clearance to facilitate drainage works. We were delighted to contribute to these works, where both client and contractors worked together to increase the capacity of the East Coast Mainline.

We pride ourselves on employing local people and delighting our clients by delivering a quality product safely and on time.”