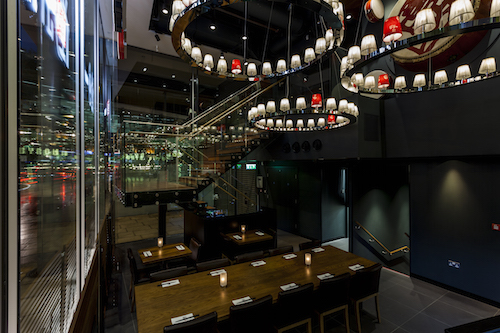 Ramen is a basic broth derived from the essence of pork, chicken, beef, or seafood, and seasoned with soy sauce, salt, miso, and other important ingredients. Shigemi Kawahara, Director of IPPUDO, has overseen the expansion of the IPPUDO brand. Ippudo London is the 46th Ippudo restaurant outside of Japan. Globally, Ippudo is operating over 120 stores in 13 different countries.

Work began on London’s IPPUDO in June 2014 and were completed by the end of September. The £1.5 million project is being worked on by owners; Japanese Ramen Company and main contractors Thompsons, Japanese architects YAN and London based Stiff + Trevillion, the kitchen equipment was supplied by Nelson, mechanical and electrical consultants Chapman Ventilation also worked on the scheme alongside structural consultants Thomasons.

The design concept for the Ippudo restaurants was created by YAN, in close collaboration with Ippudo’s owners, The Japanese Ramen Company. Stiff + Trevillion were delivery architects in London who worked on the ground to bring this vision to London.

Located in the mixed use development Central St Giles the venue spans 430 metres squared; the space originally comprised two floors with very high ceilings. The space has now been converted into two mezzanine levels on the ground floor and in the basement enabling the venue to serve 78 covers.

The interior design of the space boasts many bespoke items which have been imported from Japan. Unique features include 3D graphic tiles which have been designed to fit together and create a single textured image.  Another special art piece is an iconic photo of Mount Fuji which peers out from behind timber slats and a feature staircase to the ground floor mezzanine, helping diners evoke the ramen house atmosphere.

The venue also contains an open kitchen which brings the theatre of food preparation to diners as they await their meals.

By mid-September most of the structural work has been completed and the interior design was being finalised, there was just the finishing touches left to add. We caught up with Yukiko Kondo of Stiff + Trevillion to find out more about what it meant to the firm to be involved in the project:

“Stiff + Trevillion were delighted to be part of Ippudo’s first venture into not only London, but Europe and to help maintain the integrity of the Ippudo brand. We thoroughly enjoyed working on London’s IPPUDO Ramen.”

The design firm have been involved in a plethora of high profile projects including Hixter Bankside, Chucs Bar & Grill, Mayfair, as well as currently being involved with Jamie’s Italian in India and Brazil.

Over the past 30 years, Nelson Catering Equipment has built a solid reputation for its all-encompassing kitchen design and installation service with an extensive client portfolio ranging from restaurant and bar kitchens to major event-production kitchens.

Ippudo’s new London site needed a stunning, large, open kitchen – totally visible from the restaurant – and a fully fitted bar as well as various ‘behind the scenes’ facilities. These included a preparation kitchen, a noodle kitchen, ambient, refrigerated and freezer storage rooms and finally, a super-efficient dishwashing station.

Nelson’s team needed to translate the exacting requirements of the Japanese kitchen brigade into UK approved alternatives which involved various cooking demonstrations for the chefs in Ippudo’s test kitchen on UK specified kit. Bespoke fabrication needed to be arranged and a tight installation schedule had to be adhered to.

“We were delighted to be commissioned for this exciting venture,” commented Andy Bugge, who project managed the entire job with the support of Nelson’s experienced design team.

“It’s the chain’s first venture in Europe and, as such, will be an important flagship for the brand.”