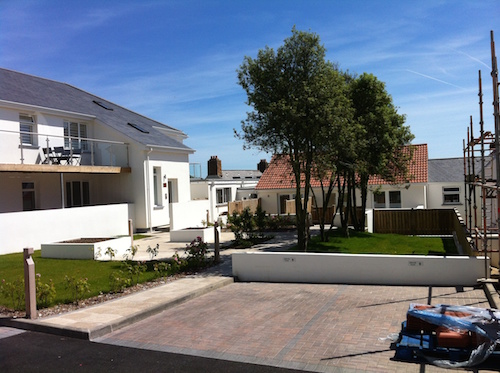 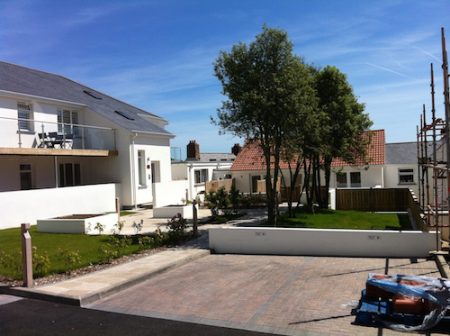 Waddington Architects was formed in 1998 and is a Jersey based architecture, interior designer and landscape design consultancy.

Waddington’s offer an array of services across all sectors and since their inception have established an impressive portfolio of projects.

We caught up with Mike Waddington, the firm’s owner and Director, and Associate Director Matt Rentsch and Architects assistant Russell Kinnaird to find out more about the firm’s previous and current projects.

Waddington Architects are currently in the process of restoring and renovating a classical Georgian property in Jersey on behalf of a private client. Works on the Rockvale property took place over two phases beginning in November 2012 and are set to complete in November this year.

The two-year project began with the restoration and renovation of the main Listed property, which completed in July 2013. The main house was renovated throughout, however remained a five bed property despite being substantially remodelled internally.

Phase two began in December 2013 and included the demolition of an existing 1960s flat roof extension attached to the main listed building, as well as the construction of a new two storey high quality contemporary extension. The new extension was required by the client to act as a residence for an elderly relative.

We caught up with Mike Waddington, Owner and Director of Waddington Architects, to find out more about the project. Mike commented:

“The single biggest difficulty we encountered was gaining planning permission for the two storey extension. We could have very easily settled for a single storey extension which would have made the planning process more straight forward, however our client was keen to construct a master bedroom at first floor level, offering great views, so we pursued the two storey option. 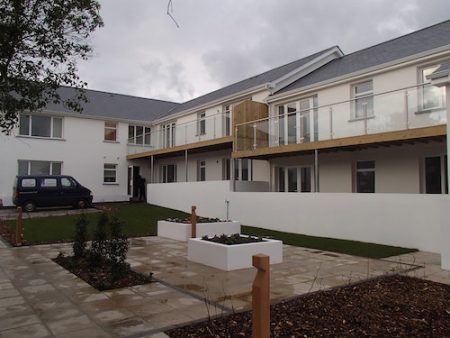 “It was very challenging however, but through careful attention to detail and design, as well as producing excellent CGI’s, we were able to convince the planners that the two storey structure was going to compliment the house, as opposed to challenge it.”

J P Mauger acted as the main contractor during the project, acting as an integral cog in the construction process. The ground floor element of the two-storey extension now comprises an open plan kitchen and dining area, which flows through from the Listed house. The first floor of the extension has been converted into an impressive Master Bedroom suite.

Both floors are set within a landscaped terrace setting, which has been designed by Waddington’s to blur the distinction between the interior and exterior of the property. Large sliding doors have been installed on the ground floor of the extension and the same floor finishes have been used on the terrace and inside the house so the outside flows into the interior of the house and vice-versa.

“It is always rewarding to work for individual clients, especially on their own homes, as the projects are very personal to them. It is always a buzz when a client moves into their new home and enjoys living there.”

Matt Rentsch, Associate Director at Waddington Architects, told us more about the firm’s involvement with Uplands Hotel Ltd; the redevelopment scheme has spanned three phases and has seen the hotel transformed. Matt commented:

“Working with Uplands Hotel Ltd on these projects has been really enjoyable and rewarding in helping our client to turn the hotel into 16 spacious one, two and three bedroom apartments that are designed for modern living, whilst also renovating and refurbishing the existing listed granite buildings. 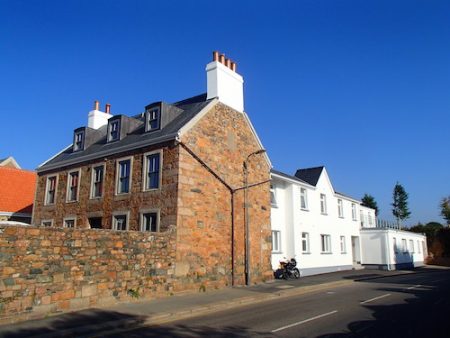 “A lot of thought was given to ensure all apartments have their own private amenity with views across the surrounding fields or overlooking the new landscaped internal courtyard. The renovated houses have their own south facing private gardens and our clients are delighted with the finished products of all three of the developments.”

Uplands Court now comprises 16 residential apartments which have been designed within the fabric of the existing hotel. At the beginning of the project the building was gutted internally and taken back to reveal the main enclosing walls, as well as a new slate roof being installed with high performance double glazed windows.

The residential block has also been wrapped with external wall insulation to greatly improve the thermal performance of the building. The apartments include generous size open-plan living rooms as well as fully fitted kitchens with all the associated appliances. Oak veneer internal doors also feature in Uplands Court, as do attractive and stylish bathroom fittings.

External metal and glass balconies have been installed to the first floor apartments, and the ground floor residences have access to private terraces and gardens adding a touch of luxury to the block. As well as private balconies and terraces apartment owners can also enjoy the stunning internal landscaped gardens.

Such was the success of Uplands Court that all of the apartments sold very quickly following completion.

Another aspect of the Uplands project involved the conversion of Uplands Barn into an impressive three bedroom property. The original, dilapidated building used to hold storage areas for the hotel, a small unit of accommodation and a large modern agricultural looking shed structure attached to the main facade of the building for storing cars.

A granite building, which was fully revealed after the shed was removed, has now been transformed and fully restored to its original design. The existing granite walls have been repointed, a new slate and terracotta pantile roof with fascias and Jersey cement verges have been provided, as well as new double glazed timber windows and conservation roof lights being installed to flood the interior with natural daylight.

Internally the building was gutted and three large double bedrooms have been constructed within the two storey part of the building. The single storey building has been designed with a vaulted ceiling that exposes the existing refurbished timber beams and A-frame roof structures. This building boasts a large fully fitted kitchen with all the associated appliances, as well as a dining area within the central section and a lounge to the far end all with access out to the private south facing enclosed garden.

“The end result of the barn renovation has been very well received by everyone who has either worked on the project or had the pleasure of seeing this great looking building being stripped of its modern interventions and returned to its former glory.” 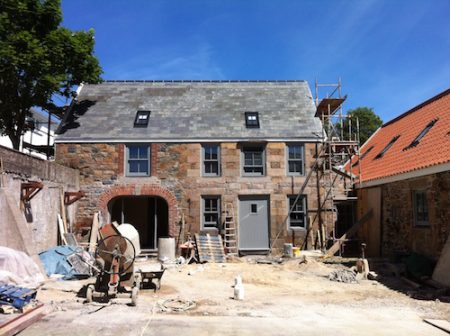 Uplands Gatehouse was originally the hotel lounge and bar along with two floors of staff accommodation and was in desperate need of refurbishment. The project comprised stripping the building back to the four walls as well as the removal of the large unsightly box dormer within the roof.

A new roof was installed with new smaller more traditional lead-lined dormers and double-glazed timber windows throughout. The new staff new accommodation comprises four large bedrooms, two of which are en-suite, on the first and second floors. At ground floor level a large separate kitchen diner has been constructed and a new staircase off the main entrance that then leads to the lounge. A south facing private enclosed garden is also part of the Gatehouse development. Just like the Barn development the Gatehouse has been returned to what is now a grand looking granite farm building.

“Working with old buildings is hard as you don’t know what you’ll find until the building is stripped out and you start working with the existing fabric and structure. Thankfully the main contractor, Marett Construction, worked with the team to overcome any challenges that came their way and ensured the client was kept fully aware of the development through to successful completion of the various projects.”

Waddington Architects are currently involved with Le Choiseul undertaking a complete refurbishment, part demolition and extension of an existing Arts & Crafts property, as well as an external enhancement and extensive landscaping. The project is due to complete at the beginning of 2015.

The property is located along La Rue du Hucquet, with the main two-storey house having had several flat roof extensions. A separate single storey unit of accommodation sits alongside the main house to the east. A small pitched roof conservatory is positioned on the south elevation with access out onto a small terrace.

Before the project started the house was predominantly painted render with terracotta tiled pitched roofs and flat roofs, historically unsympathetic replacement windows and the garden was well kept and tree lined with planted borders.

The project has involved the removal of the property’s conservatory and the semi-circular bay window, as well as constructs a large timber and double glazed orangery with roof lantern which would offer access out into the garden and new landscaped terraces.

The interior has been remodelled by removing several walls and structural steelwork has been installed to create a large open plan kitchen and dining area with direct access into the adjacent orangery.

We hope that the completed project has helped to harmonize the disparate modern additions, and rediscover Le Choiseul’s elegant Arts & Crafts roof.