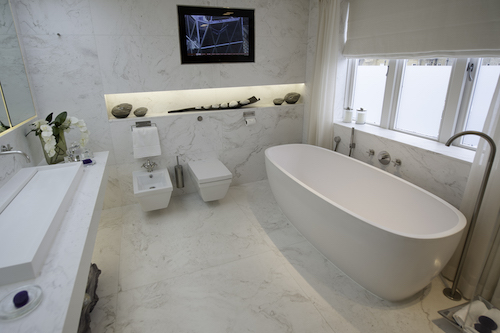 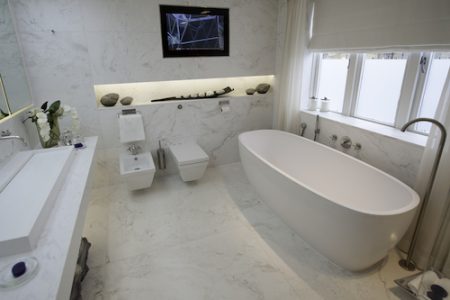 The renovation of a penthouse apartment on Chesham Street in Belgravia has now been completed following an extensive revamping process.

Works on the London apartment were undertaken on behalf of a private client by main contractors SPD and Anna Ghomi Consultancy.

Works commenced on site in 2012 and saw the original apartment transformed. We caught up with Anna Ghomi, lead designer on the project, to find out more; she commented:

“The original apartment was sombre and tired and suffered from a layout which was less than perfect. The hall was rather large and the bathrooms were too small and so the brief from the client was to transform the space into light and airy contemporary rooms whilst still maintaining a sense of tranquillity.”

In order to achieve this brief the design team decided to reduce the width of the hallway and used the extra space in the kitchen creating a much larger area. With regards to the apartment’s colour pallet the team used varying shades of white; white backed linen, white upholstered doors and architraves, white leather and Armourcoat special wall finishes feature throughout the space.

A pale smoked oak floor features throughout the penthouse apartment adding a sense of flow to the space. The floor boards were finished in white oil which gave a grape hue to the flooring establishing a subtle colour theme which was then continued throughout the entire apartment.

The original bureau in the old apartment was dark veneer which created a darkness to the space which the clients wanted to change. The bureau was therefore sprayed white on site and faced in stitched leather, mirrors were also used at the back of the unit creating light and giving the space a sense of depth. A Chartreuse colour was selected as an accent colour in most areas of the apartment.

The furniture, rugs and unit seating were bespokely designed and manufactured by the design team. The layout of all of the rooms were configured in order to create a sense of peacefulness, this is especially the case in the Drawing Room which generates a sense of order and tranquillity.

The white theme was continued into the kitchen which features innovative handle-less cabinets from Boffi, as well as composite work tops and a glass extractor. The kitchen walls were finished in a polished plaster and appliances were supplied by Sub Zero, Boffi and Miele.

In the hallway an impressive atrium was created by opening up the ceiling space. This increased the flow of light in to the apartment and added to the light and airy feel of the space. The Master Bedroom, another feature space of the apartment, has been finished in shades of white and comprises a mixture of textures of linen, leather and lacquer. A feeling of height has been created in the bedroom by creating an illuminated coffer in the ceiling.

The clean lines of the Master Bedroom have been influenced by the Marike basin, Agape Bath, classic Tara taps finished in Platine, as well as the use of Volakas marble in a honed finish. The guest shower room has a stunning illuminated back wall detail in Statuario Honed marble, as well as a complimentary matching sink fabricated by Keystone.

The whole apartment is air conditioned and supports the latest in home automation by Crestron.