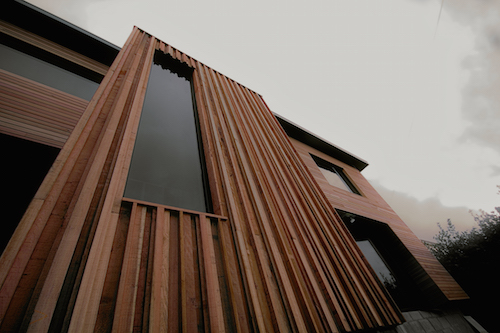 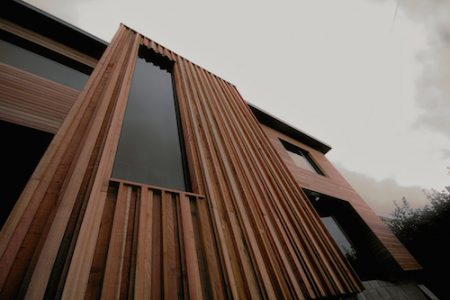 The construction of an energy efficient, contemporary, two storey house in Guernsey is progressing well.

Works on Maru a Pula started on site in January this year and are due to complete early 2015.

We caught up with David De La Mare, the Director of DLM Architects, to find out more about the development. David commented:

“We acted as the architect for the Maru a Pula project as well as undertaking the role of day-to-day project management of the construction. There isn’t an appointed contractor for this job so we are acting as the contract manager, coordinating specified sub-contractors and sub-consultants for the client in line with their budget and schedule.

“We became involved in the scheme when the client approached us to develop a previous planning permission to something that suited their needs. They wanted a contemporary solution that could be built within their budget.” 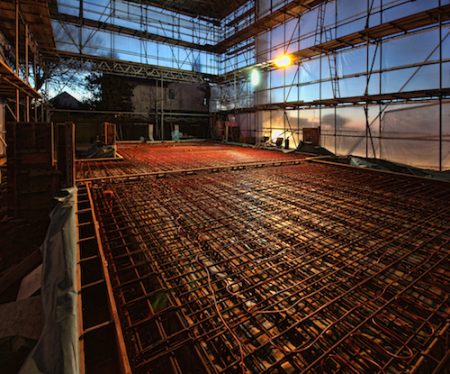 The site used to house a chalet bungalow and so the development has involved the demolition of the site’s existing structure, as well as the construction of a two storey home. The client was keen to make the most of the sea views to the south of the property. In order to achieve the brief the ground floor of the new property has been raised above the existing level and provides adaptable and open dual aspect living space throughout the house.

The property is in quite an exposed location and so a dense structural fabric has been constructed in order to limit external noise and reverberation. A range of natural and composite materials have been used and feature on the exterior of the property, exposed in their raw form. These materials allow the building to weather into the surrounding landscape over time.

The new property has remained within the footprint of the original house and outbuilding on the site, as well as having maintained a similar roof line with the height of the original bungalow. Working within these parameters the team was able to satisfy the planners.

Works began on site in January 2014 with the demolition of the bungalow and ground slab, as well as the separation of all the waste on site to be used where possible within the new works.

Due to the type of soil in this area of the south coast and the raised slab level, it was considered more cost effective to build the new house on piles. 25 steel piles were driven in to the ground to support the 250 millimetre thick RC slab. The slab was insulated fully below and around the toe edge and the underfloor heating cables were installed directly into the steelwork. 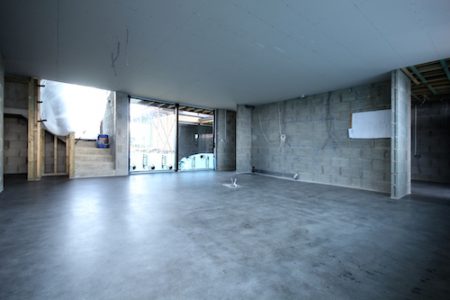 This process maximises the thermal mass of the structure and the entire slab acts as a heat store, meaning Guernsey’s electrical off-peak rate can be utilised with a slow release of heat throughout the day. It also allows the slab to absorb solar gain and release in the same way, giving a very consistent passive control over the temperature within the house.

The house also has an exposed concrete finish to the ground floor using the same structural slab, which has been powerfloated, ground, polished and sealed.

Before the slab was poured, a full height scaffold canopy was erected in order to prevent any delays from the winter weather. However the project did not run as smoothly as hoped with record winds battering the island’s south coast and bending the scaffold structure. As a result of this the project had to be stopped until the winds dropped enough to remove the entire scaffold as it was too dangerous to work within and prevented the blockwork from progressing any further. Two months later, in March, works continued and a positive change in the weather meant the canopy was not felt necessary.

The first floor of the property has been constructed with a thick reinforced concrete slab, cantilevered in areas, with a ceiling suspended below which allows all services to be routed between. It is constructed in the same way as the ground slab, with integrated heating and a powerfloated finish.

Within the first floor slab there are stepped levels to allow for the external balcony, wet rooms, and the concrete staircase located within the vertically clad stair core. Due to the method of construction, the entire structure of the house is wrapped with an unbroken layer of closed cell insulation, with a block outer skin to protect it from the elements.

The roof is constructed from steel and timber with a slender trussed soffit to provide solar shade to the first floor windows, as well as giving the impression of a far slimmer roof structure. The soffit and facia has been wrapped in bespoke powder coated aluminium profiles to contrast against the cedar cladding.

Windows have been positioned and sized throughout the new property to maximize views, and respond to natural light and solar demands of the internal space it serves. The window frames have been partially concealed internally and externally at first floor level to maintain the light weight appearance of the upper level.

Areas of cedar cladding tie aspects of the property together, as well as visually breaking down the overall mass of the entire building. The cladding will remain untreated, and as such is another maintenance free element that will weather and soften the building within the landscape it sits.

Those entering the property will be struck by its robust structure and exposed location, contrasted against the attention to each and every detail and connection. The palette of raw and natural materials provides a softness to the contemporary design and results in a very low maintenance building.

David commented that although works are progressing well there is still a way to go. He added:
“The first fix electrical and plumbing is now complete, and the building is wind and watertight, so the plasterboard has just started going up. Over the coming weeks the external render and landscaping will be completed, followed by a calcium silicate board with seamless silicon based render to the soffits around the entire perimeter of the ground floor.

“The render will also be finished to a shadow gap, level with the internal floor over a powder coated aluminium plinth. Internally, there is combination of polished plaster, tiling, skimming, decorating, timber paneling and joinery left to complete. 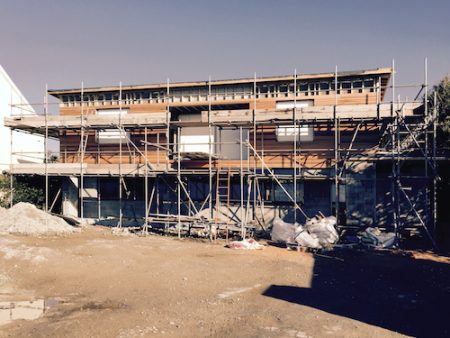 There is also second fix plumbing and electrical to be completed. A range of invisible speakers, plaster in light fittings and a wireless smart lighting system has been used throughout.”

David said it means a lot to DLM Architects to be part of this project. David expanded:

“Having had previous experience on a range of bespoke residential work and multi million pound commercial buildings in the UK, DLM Architects was created to design and build some unique residential projects in Australia before returning to Guernsey just over two years ago.

“Maru a Pula has been key in establishing my return and developing the practice with a direction in architecture and construction that I feel is too often overlooked in the island. It has re-connected me with contractors, consultants and suppliers and formed an awareness of what we do. These relationships and support encourage us to move forward and continue to push the boundaries. The project has been an opportunity to demonstrate the quality of workmanship and applied attention to detail that is critical to the bespoke service we offer. It is an example of what can be achieved with careful thought, coordination and a willingness to challenge tradition.”