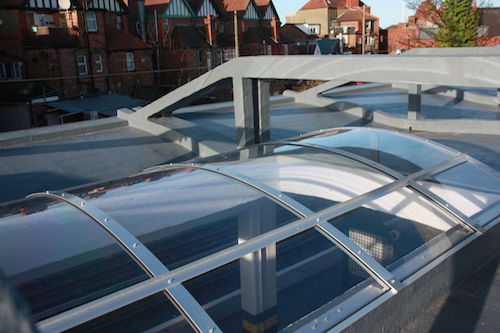 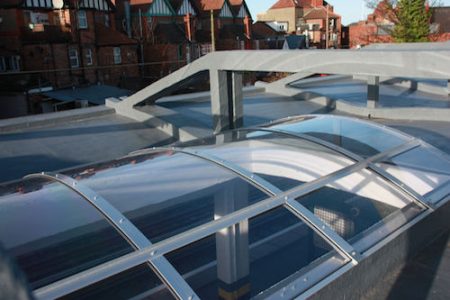 The station’s 1930s train canopy, with its concrete and timber deck and skylights, had started to leak due to its age and was in desperate need of attention.

Repairs were previously undertaken as a short term fix, but owing to a degree of concrete spoiling that was causing material to drop on the platform, a refurbishment of the roof was deemed well overdue. The contract for the station roof repairs were tendered to Briggs Amasco.

The scheme has seen the station gain a new roof, the underside of the station canopy has been stripped and painted, CCTV has been installed as has new lighting.

Unfortunately for the on site team asbestos testing uncovered traces of chrysotile asbestos in the roof so a highly experienced asbestos removalist, Howard Stott Demolition, was employed to undertake the job of stripping off the existing roof coverings and dealing with the issue.

This caused a delay and so works renewing the roof did not begin until July 2014. At the client’s request, Briggs Amasco installed 900 square metres of Sika Liquid Plastics roofing system, including a Decothane Delta 25 Liquid Plastics product with 120mm thick Decotherm insulation and Decothane base and top coats.

These materials were chosen for their long life span and environmental credentials, as required by the client, with the cold applied system resulting in an eco-friendly application.

The main challenge of the project was undertaking the work in the middle of a busy train station near a residential area, so issues regarding noise and disturbance had to be considered. 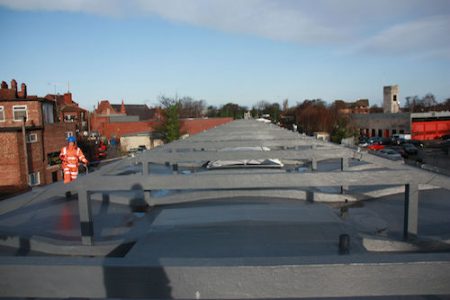 The train station was kept open while the works took place which meant there needed to be as little disruption to staff, the public and commuters as possible. Acoustic mats and polythene were used to keep dust and noise to a minimum. Briggs Amasco was able to ensure quick application of the Sika Liquid Plastics roofing system and the product was readily available ensuring the client’s tight time requirements were met.

Working in harnesses, during possessions and during the night in cold temperatures, the job included complex detailing, installation of new full barrel vault roof lights and a Latchways ManSave system. Concrete repairs to the roof were completed and specific colour paint was used on the trim to match the corporate colours of the rail operator.

“The roof installation was challenging because of the methodology of the works; all operatives had to be fully harnessed up as you could not put a handrail up due to the third rail. Being clipped in at all times was essential while undertaking these works and working weekends was a must to ensure the project was completed on time.

“The overall aesthetics of the project is first class, everyone who worked on the project has done a great job and it is a very pleasing outcome.”