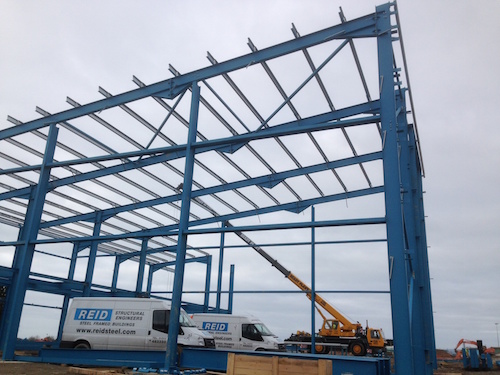 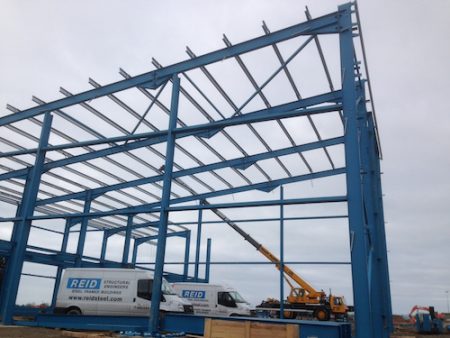 A project to construct a brand new, state of the art Air Cargo Centre at Jersey Airport is progressing well and is set to complete in September 2015.

The States of Jersey scheme involves the construction of a new cargo centre facility comprising six units, as well as an airport engineering building to replace the existing centre, which is over 50 years old.

We caught up with David Tisdale, Capital Projects Manager for Ports of Jersey, to find out more about the project. David commented:

“The structure is being constructed on the south side of the aerodrome, which is closer to the main apron and taxiways than the existing cargo centre. The existing centre is due for demolition once the new facility is opened and in its place Ports of Jersey, with a development partner, will be building a new hangar facility for a corporate aviation business.

The on site team, comprising main contractor Hacquoil & Cook, have so far completed the ground works and erected the building’s steel frame. The team is also fitting the centre’s roof and hopes to finish the cladding by the end of March; the ground floor slabs will then be laid and the internal fit out will commence.

“Unexpectedly we encountered an archaeological issue on the site when we found remnants of the footings of an old hangar, which was estimated to be of German World War Two origin. We couldn’t demolish that so we had to re-design the footings of the new cargo centre in order to work around what we had found.” 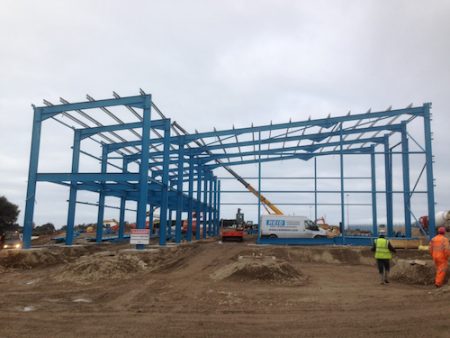 There have been no operational impacts on the airport as a result of the construction activities, as the building site is located to the south of the main apron area and so is not interfering with the airfield. The team is having to be mindful of crane operations on site but are far enough away from the taxiways not to impact any aircraft movements.

David said the project is an important investment for Ports of Jersey; he added:

“This scheme is the first step of our activities to remove obstacles and replace aged assets in the area. This project will replace the old cargo centre and an old engineering building, housed in a separate hangar, which is too close to the runway and so needs demolishing.

“The centre is an important business asset as it is larger than the existing centre and so present s a commercial opportunity for the business to grow and expand its offering. Being involved in this scheme is quite exciting from my perspective as I am originally a geotechnical engineer; so to be part of a construction project of this size in Jersey is great.

“It is the biggest construction project in Jersey at this time, in terms of the sheer footprint and size of the building. I haven’t worked on a building project of this size since I worked in the UK.”

Ports of Jersey has invested heavily in the local civil engineering and construction industry during this scheme as they are keen to support local business. David added:

“We are lucky to have got a great contractor, Hacquoil & Cook, to do the works. We make a significant investment in the local economy so it is great to use local traders for this landmark facility.”