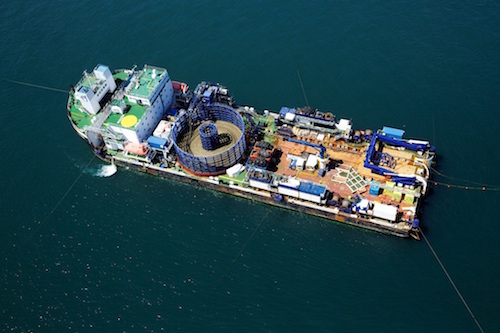 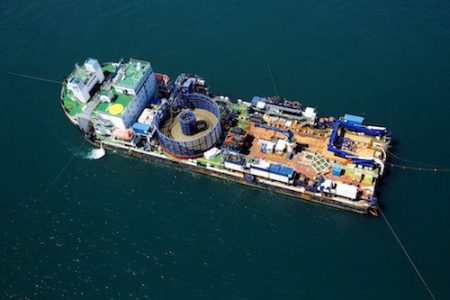 A secure, affordable and low carbon energy supply is an important asset for Jersey in attracting environmentally conscious businesses to the Island – and the construction work that this brings to accommodate them.

Decarbonising and becoming more sustainable is a goal for many, particularly in the financial services sector where boards typically measure and report on their company’s carbon footprint on a global scale.

The completion of Jersey Electricity’s Normandie 3 (N3) project to install a new, 32km, 100MW subsea supply cable from France to import electricity from low carbon nuclear and hydro sources will benefit all sectors, including construction. 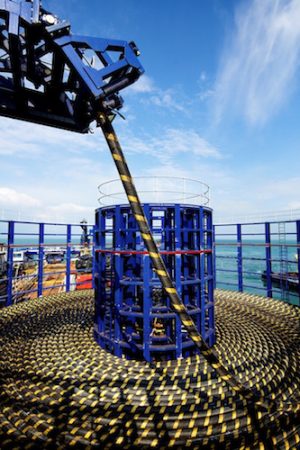 N3, a joint venture between Jersey Electricity and Guernsey Electricity (GEL) as partners in the Channel Island Electricity Grid (CIEG), was a complex engineering and consenting feat and, at just under £70m entirely privately funded, one of Jersey’s biggest private investments in infrastructure.

Designed from the outset with security paramount, N3 was installed along a more southerly route than JE’s previous interconnectors, Normandie 2 (N2) and the now out-of-service EDF1. It enters the sea at Pirou Plage, Armanville, and comes ashore at Long Beach, Gorey in Grouville Bay. Importantly, it connects to a different and more robust part of the French network at Réseau Transport d’Électricité’s (RTE) upgraded 400kV substation at Périers. From here N3 runs entirely underground 19km to the coast. In Jersey, the land cable takes a 7km route, also entirely underground, from Long Beach to South Hill Switching Station, St Helier, where it joins the Jersey network.

N3 first brought power into Jersey on 24th September 2014. After three weeks of close monitoring, JE closed the N2 and N3 circuits together on 20 October and the ‘new-look’ CIEG network has been operating well since then, capable of delivering 160MW of more secure “parallel” capacity. 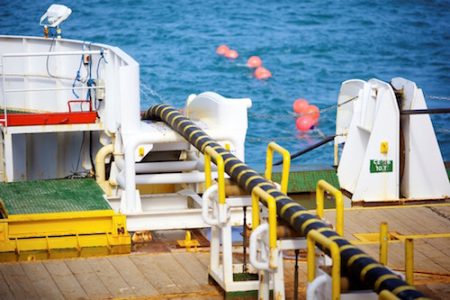 JE’s Board first sanctioned N3 in 2004. A complex nine-year planning process, involving a myriad of consenting authorities and interested parties, followed before the major install began in earnest last April when the 7,000-tonne cable-laying barge the Cable Enterprise arrived in Brest, having collected the 35km subsea cable from Prysmian’s Arco Felice plant in Naples.

JE Senior Project Engineer Jeremy Willis joined the 60-strong crew aboard the Enterprise as on-board client representative. After equipment and anchorage testing while final Unexploded Ordinance (UXO) Surveys were analysed, the Enterprise and her highly skilled crew were ready to begin their task of laying the cable two metres beneath the seabed from Pirou Plage, Normandy.

The Enterprise, one of only a handful of specialist vessels capable of doing the work in aggressive Channel Island tidal currents and which is manoeuvred by three large tugs, landed the French end of the cable in just under two hours and began her journey to Jersey on 19th April. Pulling a 50-tonne plough, with tow forces of up to 100 tonnes, the Enterprise installed the cable at an average 1.2km a day. She first grounded out in Jersey on Friday 13th June 1km from the shoreline. Seven huge anchors had been pre-installed on the beach by contractors, GPC Ltd beach works team and a safety exclusion zone was set up. 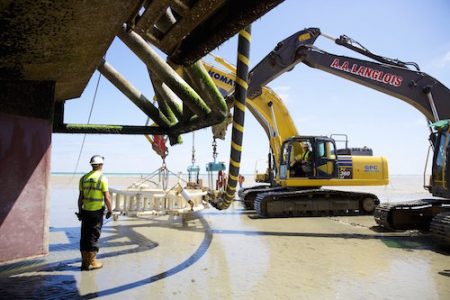 There followed two days of gradual progress up the beach as spring tides placed the Enterprise at her optimum position for off-loading the cable. With a tidal window of just four hours, this finally happened on Sunday 15th June.

The cable was lowered to the GPC operatives at 2pm and secured by a quadrant that had been sheet piled into the sand. With a second quadrant held aloft by tracked excavators and a line of rollers, over 500m of cable was hauled away, more than enough to reach the transition bay in Long Beach car park where the subsea cable joins the land cable. The operation was completed in just two hours, allowing the team on board to cut the cable and seal the ends ready for the final hand-off next day.

The GPC beach team then set about pulling the cable to within 50 metres of the duct that had previously been horizontally drilled under the sand dune leading to the transition bay. At low tide on 19 June, in a precision operation using rollers, diggers, slings and quadrants, the team performed the giant equivalent of threading the eye of a needle. After 32km the 2,500-tonne cable met the ducting inch perfect and was winched through it into the transition bay. All that remained was to plough the cable into the beach from where it emerged from the seabed. 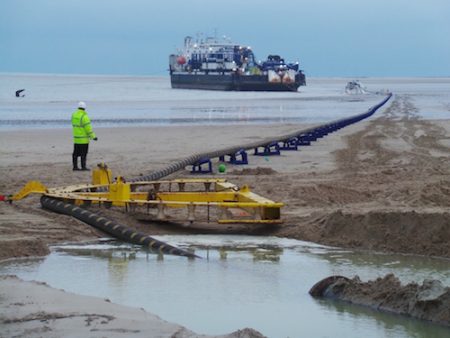 Extensive land works and equipment installation were on-going on both sides of the Channel before, during and after the subsea installation. Prysmian UK subcontracted the Jersey civil works to local contractors Jayen Ltd who began work on the route from Long Beach to South Hill in March 2013, trenching and duct laying, to minimise traffic disruption and ease future replacement. Work pulling through the 90kV land cable through started in March and jointing it to the subsea cable began on 7 August.

At South Hill itself, a new regulator was installed and in Périers, an entire new switching station had to be built and equipped on the site of RTE’s new 400kV substation. The French land works was itself a major turnkey project by RTE who made excellent progress throughout. The entire N3 circuit was completed in just 21 months after planning consent and was in service under budget and ahead of schedule before winter 2014-15.

“The project has been an outstanding achievement and a great example of extended teamwork between our contractors, partners and the public authorities in France and Jersey. Over the long term, Islanders and businesses can be assured of even greater security of supply coupled with more affordable and stable pricing. In addition, a switch to low carbon electricity is the only way Jersey can meet the carbon reduction targets set in the Energy Plan. As one of the largest main drivers of the reduction in Jersey’s carbon emissions over the last two decades, Jersey Electricity will continue to invest in a low carbon, sustainable future.”