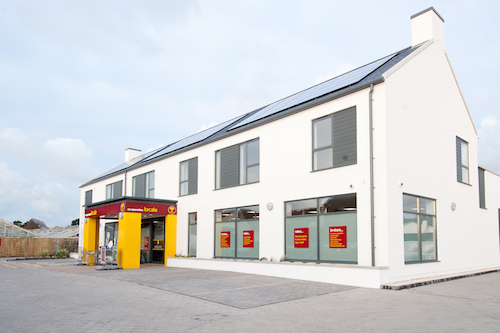 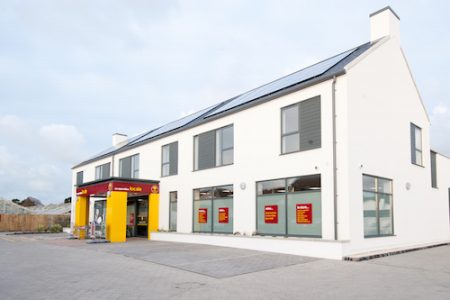 The construction of a brand new Co-operative Locale store in Grouville, Jersey has been successfully completed and the store is trading well according to local feedback.

Works began on the site in March last year involving the demolition of the previous De La Mer nursery buildings and construction of a two storey structure comprising The Channel Islands Co-operative’s store and three flats.

We caught up with Greg Morrison, Operations Director from main contractors ROK Limited, to find out more about the project. Greg commented:

“We became involved with this scheme via the normal tendering process; however we have worked with The Co-operative in the past and have recently completed projects on other stores of theirs in Jersey. The site previously contained nursery building which we have now demolished, replacing it with the newly built Co-operative Locale store and residential units above it which are being rented to Co-operative colleagues.”

The contractors then constructed a concrete shell, installed services and shuttering and built concrete columns up to first floor. The structure was then tiled, externally rendered and fully fitted.

ROK fitted the store’s bakery, manager’s offices, ceilings, floors, fridges, disabled toilets and all of the decoration. The Co-operative undertook the fixtures and fittings including the shelves which involved contractors working alongside each other.

ROK also fully fitted the three one bedroom flats located on the first floor of the structure. Each unit comprises a small kitchenette, bedroom, lounge, bathroom, balcony with composite decking, external fencing and slabs, as well as being fully serviced and decorated.

The store was completed in January 2015 and opened on the 5th February after the external signage and artwork created by Grouville School students had been displayed on the front of the building, The on-site team did encounter numerous difficulties during the scheme of works including extensive drainage issues; the location of the system was very poor, so a permeable draining system was designed by PPS and installed to deal with the problem.

Another struggle for the on-site team towards the end of 2014 was extremely bad weather conditions, resulting in the loss of five working weeks. Despite this unforeseen delay the contractors still managed to complete the project on time.

ROK worked alongside Axis Mason architects and The Co-operative’s Development Manager Brian Prigent to complete the project on-time and within budget. Greg added:

“It is excellent to work with The Co-operative; numerous members of the firm have worked with the client previously and so it is great to continue such a longstanding relationship. Also, being able to assist The Co-operative in developing a store in this location has been brilliant. To see the store open on time was a bonus.

The Channel Islands Co-operative Society Limited is a retail business dedicated to the principles of co-operative trade. The Co-operative has 14 food stores in Jersey and 10 in Guernsey which all take great pride to providing customers with the very best fresh, packaged and ambient foods and groceries at a fair price.

The newest addition to The Co-operative’s stores is their Locale Grouville branch which comprises an ATM Cash Machine, Bakery, Hot Food and Drinks to Go, Free Parking, Quick-out Self Scan, In-Store Magnifiers and a Public Access Defibrillator.