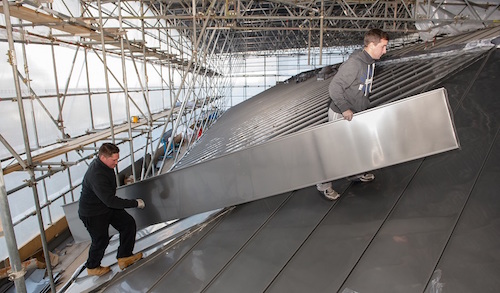 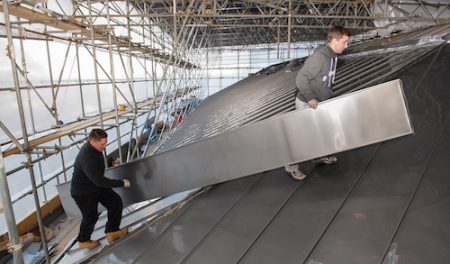 The project, which comprises the installation of the three new roofs at the hospital’s Mental Health department, is well underway with work scheduled to reach completion in September 2015.

Work began on the scheme in September 2014 and at present the first roof has been successfully installed, with work reaching completion on this aspect of the project in early January 2015. Work is now taking place on the second unit, with the subsequent unit to follow.

The roofs are being installed by Sarnian Roofing Ltd; a leading expert in roof installations throughout Guernsey. Sarnian Roofing Ltd has been proudly providing Guernsey with roofing for more than 35 years, offering a wide range of roofs, from pitched to flat. 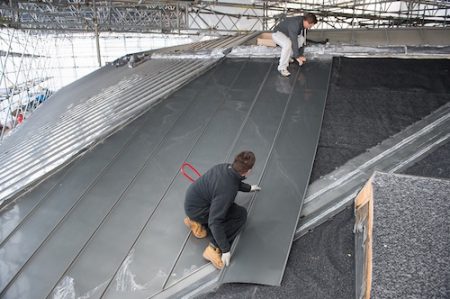 “The project involves the removal of the original tiled pitched roofs and the installation of new, standing seam zinc roofing, which we are currently installing across a total of three blocks. In order to facilitate the works, we are stripping off the existing tiles, laying a new deck, installing a vapour control layer and then introducing a product called Metdeck – a Kingspan Kooltherm insulation product – before fitting a zinc covering on top.

“As there are a number of trees around the site, the hospital was keen for us to install a new roof which would not hold moss and this is why zinc was chosen. Moss is unable to bond with zinc, so it was the perfect choice for this project.”

Work is running very smoothly; in fact Sarnian Roofing Ltd has so far not encountered any major challenges on the project. In addition, as the work was carefully scheduled and planned, the work is not causing any disruption to the daily operations of the hospital.

“When the project was put out to tender one of the key requirements was that the hospital would still have access to the services it requires, allowing The Princess Elizabeth Hospital to continue operating as usual. This is the first major project which we have undertaken with the hospital, so it is a very important scheme for us to be involved with, covering quite a vast area.” 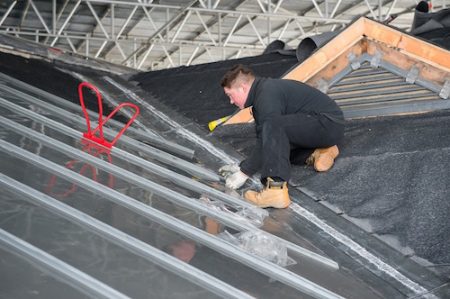 “Moving forward the scaffolding canopy is being finished on the second unit and the tiles are about to come off.”

Once all three roofs are installed on the project, Sarnian Roofing Ltd will complete its involvement with The Princess Elizabeth Hospital, but it is a client which Carl is keen to work with again on future projects.

“There is always maintenance work on sites, so we’d like to be involved in future projects with the hospital.”

The roofing project follows the completion of a new Mental Health & Wellbeing Centre which was recently installed at The Princess Elizabeth Hospital. The project was initiated to consolidate Guernsey’s mental health services into one location with improved residential and outpatient facilities to benefit new and existing patients.

The new centre includes two wards – a ten bed adult ward and a 16 bed acute ward. The bedroom wings are divided by a service core to allow male and female separation, which can be further subdivided to allow for additional flexibility when required. Meanwhile, a key space in the new Mental Health & Wellbeing Centre is the main entrance which was designed and developed to become the heart of the building and is characterized by informal seating spaces, a service user run café, natural light from clerestory glazing and a mixture of local and service user art.

Starting out with Sarnian Roofing, before developing other areas of the business including Sarnia Leadworks, Sarnia Seamless Gutters and Sarnia Pools, the Sarnia Group is an innovative company, capable of meeting clients’ needs with a range of solutions. Operating at the highest level of professionalism and with staff who are trained to the best standards of practice, the group benefits from repeat business ensuring that the Sarnia Group is a name recognised throughout the island.

Each time the company develops its portfolio, it does so with careful consideration and planning, to ensure that the group hits the correct market. In addition, the group looks to offer clients a range of products which no other Guernsey-based business is offering.

For more information about the Sarnia Group, email: info@sarnianroofing.com.