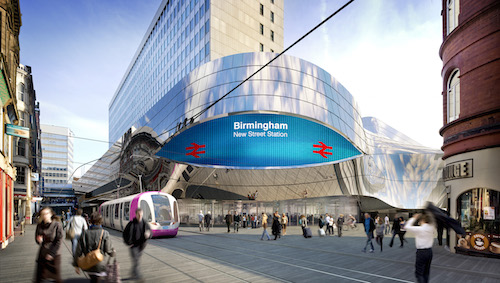 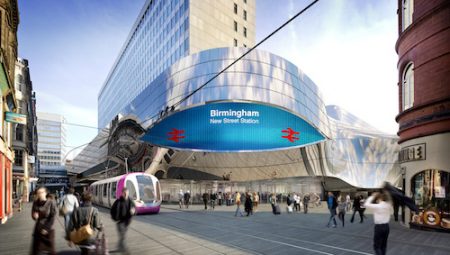 A massive multi-million pound scheme to comprehensively redevelop Birmingham New Street Station, creating a world class transport, shopping and community icon in the heart of the city, is due to be completed this autumn.

Known as the Gateway Plus project, the complex, multi-phased development to increase passenger capacity for one of Britain’s busiest transport interchanges also includes the redeveloped and re-named new Grand Central retail centre, set above the station and home to 60 stores across 500,000 sq ft, anchored by a 250,000 sq ft John Lewis department store – all while keeping the existing station operational.

The original retail centre was built in 1971 as part of the reconstruction of Birmingham New Street station below, and was known as the Birmingham Shopping Centre before it was eventually renamed The Pallasades.

Mace is both delivery partner and principal contractor for the project, working in partnership with Network Rail. The project is backed by Network Rail, Birmingham City Council, Department for Innovation and Skills, Centro and the Department for Transport.

Before the project started the station was dark, unwelcoming and overcrowded with poor access for passengers. New Street station is used by over 170,000 passengers every day, more than double the number it was designed to accommodate. New Street is the busiest station outside London and the busiest interchange station in the UK with a train leaving every 37 seconds.

The development, with 1000 workers are currently on site, working 24 hours a day, 7 days a week, includes the creation of a new station concourse three and half times the size of its predecessor, covered by a striking atrium roof and a 16,000 square metre steel external façade. To make way for the new concourse, major demolition work was necessary including a multi-storey car park, with the work being meticulously sequenced to ensure that the station remained operational and posed no health and safety risk.

For the demolition, Mace implemented an innovative ‘track and hoyer’ system – a two stage cut-and-lift process involving crane rails, which ran the length of the building as the ‘track’ and a gantry crane acting as the ‘hoyer’.

Transferring the load of the atrium roof onto the existing station structure was another technically challenging aspect of the project. The 3,300 square metre atrium, made of steel and ETFE (a hard-wearing, self-cleaning plastic) is designed to flood the new concourse with natural daylight and create an attractive, open retail environment.

The redevelopment also includes a new station entrance on the north west corner, providing direct access from the station to the city’s business district; new train crew accommodation which has been constructed above Platform 1 and is now home to over 400 train crew; 36 new escalators and 15 new lifts – reaching every platform.

In addition, there is a new Moor Street link providing access to the new station concourse from Moor Street station and Smallbrook Queensway, and a new public square in front of the old main station entrance.

The first section of Birmingham New Street station opened in April 2013 and marked the halfway milestone of the 5 year project.

The redeveloped station will be bigger, better, brighter and lighter and give a fantastic first impression of the city. It will give passengers three and a half times more space and transform the grey, concrete exterior into a stunning building fit for the 21st century. The project will generate over £2bn in transport and wider economic benefits for the region.