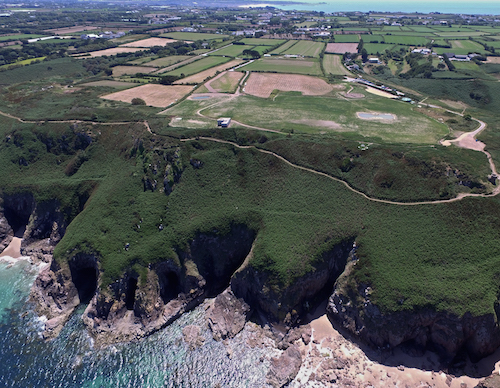 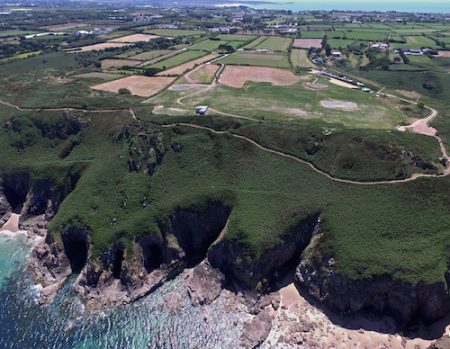 An award-winning, £7.15 million project is returning Jersey’s Plémont headland to a picturesque haven for wildlife, following the demolition of a collection of derelict buildings and the careful restoration of the site’s natural beauty.

The project has won a Non-Governmental Organisation Impact UK national award from the Chartered Institute of Ecological and Environmental Management – in competition with other organisations including the UK National Trust. In addition, the scheme scooped the Channel Islands Insurance Corporation Conservation Award for Best Overall Project.

The buildings – which comprised an old Pontin’s Holiday camp – have now been demolished, removing them from the Plémont headland forever.

The land was purchased early in 2014 and demolition started early 2015.

Demolition works were phased over a six month period, with wildlife relocation and asbestos removal being the priority before the buildings were demolished and the site totally cleared.

John Parkes lands manager of The National Trust for Jersey said: “The buildings had been abandoned since the early 1990s and were very dilapidated, contaminated by asbestos and had been heavily vandalised. It really was an eyesore.

“Planning permission had been granted to construct a housing estate on the site, but there was a strong feeling on the island that the site was an inappropriate place for the development. That was when The National Trust for Jersey got involved with a public campaign to stop the planned development and restore the headland.”

He added that because the site incorporated a number of rare protected species such as the Green Lizard, as well as slow worms and common toads, newts and protected small mammals, these had to be relocated into protected receptor sites prior to the start of demolition works.

“This was a challenging project due to the timeframe we had to relocate these species quickly as some were due to go into hibernation. We also had to contend with the presence of asbestos on the site. However all this was accomplished successfully.

“Once the buildings had been demolished, the rubble was transported from site, with 7,000 tonnes of topsoil suitable for creating a heathland being brought in on the return journey, in order to cut site movements by half.”

Other works on the scheme included the creation of ponds for the wildlife. One of the ponds was created on the footprint of an old swimming pool, making use of the original indentation on the rocky site.

Main Contractors were AA Langlois, who were praised for their work.

“AA Langlois and their team did a very good job on budget,” said John Parkes.

After the contractors left, embedded remaining rubble on the site emerged following heavy rain, and this was removed by hand by volunteers.”

Further works include the planting of maritime grassland and heathland, including gorse, broom, hawthorne and heather, although this will take some time to establish. A low sow rate of heathland grass has been used in order to help speed up the restoration, but still allow sufficient gaps for natural regeneration to occur.

Dry stone walling is also being carried out around the site, with local unemployed people being given training in this exacting technique.

The wildlife is now returning, with toads having already spawned on site.

A former German bunker is the only building now left on the site and was retained because it is of historical interest.