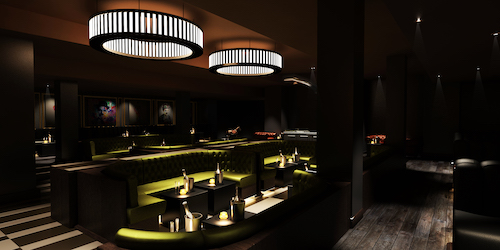 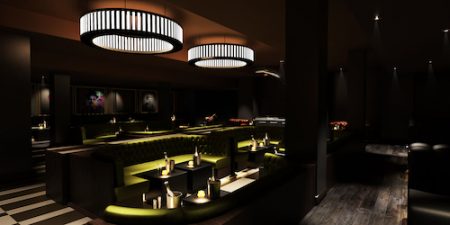 Charlie – an exciting new nightclub based in London – has replaced what was previously Funky Buddha, one of London’s top nightclubs since 2001. Located at Berkeley Street in Mayfair, the new luxury nightclub is the place to be.

The venue is set to be the new playground of the rich and famous and is located a few doors down from exclusive restaurants Novikov and Nobu. JKI Design & Build worked as main contractor on the basement development which began on site in July, with doors opening on September 9th.

With a floor area scale of approximately 287 sq metres, the club offers plenty of space for dancing, drinking and socialising. The design concept is luxurious, quirky yet snug, with dim lighting and bold colours and patterns that offer an eccentric interior.

Statement patterned flooring designed by Tibbatts Abel sets off the dynamic visual, alongside a bespoke product by Amtico Flooring. Contrasting off white and charcoal were chosen to create a modern twist on a traditional style tiled floor.

Apple green leather and black woven upholstery fashion a bold statement, with the chesterfield style banquette seating that delivers a comfortable and lavish club area that is reminiscent of a gentleman’s club. The club is embellished with distressed gilded wall panelling that contrasts with the elegant black gloss mirrored bar fronts. 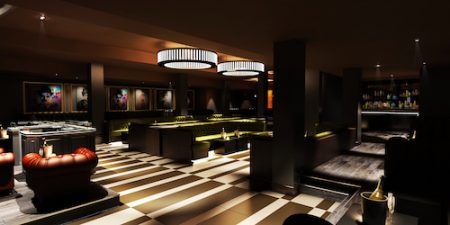 With considerable experience as London nightclub designers, Tibbatts Abel worked alongside the team at Charlie to deliver an innovative concept inspired by the life of Charlie Chaplin, British comic actor and film-maker, whilst producing an exclusive feel to the club.

Tibbatts Abel was established in 2007 and consists of a range of restaurant, hotel, nightclub and bar designers. The partners bring with them over 30 years of unique industry experience, which collectively create a leading interior design consultancy that offers a spectacular architectural and interior design service.

Tibbatts Abel is a creative and dynamic company who strive to craft original and memorable venues, typically working with independent clients who they work with to develop a unique concept and translate this into a profitable and one of a kind venue.

Premier Hospitality spoke to Mimi Jade Fisher, Director at Tibbatts Abel, to find out some information on Mayfair’s latest addition. Mimi told us:

“It was an exciting opportunity to re-invent an existing venue and work with the client to realise their visions. Upon initial building investigations we found the existing ceiling was dropped and immediately recognised the opportunity to be able to open up the space and create some dramatic ceiling height within this venue.

“We ceased the opportunity to create a statement with the light fittings and create a staggered ceiling which enabled the outer flanks of the club to remain intimate and social spaces.”

Chantelle lighting worked with Tibbatts Abel to create two large feature disc pendants which now hang over the central club area in line with the DJ unit. The feature lights add contemporary and lively elements to the venue. Commissioned artwork by artist Richard Zarzi adorns the walls with modernised images of the icon Charlie Chaplin, which inspired this project.

“Mayfair now has the high end nightclub which it is crying out for. Berkeley Street is an area which has evolved and boasts exclusive restaurants like Novikov and Nobu and now Charlie sits perfectly alongside these.”

Upon descending into the basement venue Tibbatts also worked with Haig Club (David Beckham’s Whisky brand) to create an exclusive member’s lounge area which complements the main club perfectly with the blend of traditional and contemporary elements. Haig Club also features an adaptable dining table which transforms into a pool table to create a unique experience in the heart of Mayfair.

Tibbatts Abel has delivered a number of other projects around London, including Korean restaurant Jinjuu, The Coach as well as The Hand and Flowers for celebrity chef Tom Kerridge, and Buddha Bar in Knightsbridge.

Chantelle Lighting has been designing and manufacturing bespoke light fittings for the hospitality industry for over 25 years. The establishment boasts a team of highly skilled, artisan craftsmen and women who use their expertise to create jaw-dropping lighting for hotels, bars, restaurants and many other commercial and domestic locations.

In addition to their involvements with Charlie Berkeley Street, Chantelle Lighting has also completed work for some of the largest brands in the UK, and designers and architects choose the company to work with because of their unrivalled experience in working in the hospitality industry.

Premier Hospitality caught up with Anthony Holly, Managing Director of Chantelle Lighting, to ask a few questions about the company and their project on Charlie Berkeley Street. Anthony told us:

“We were commissioned to design and manufacture two huge LED ring pendants with colour changing panels which connect to the venue’s music system to create a unique atmosphere for visitors to the club. One of the main challenges was ensuring that the sound system in the club worked with the LED.

“Charlie looks set to become one of Mayfair’s most exclusive nightclubs following its launch night which was attended by a host of celebrities. We were delighted to be involved in such a high profile project, especially as it allowed us to test our creative and manufacturing skills to such an extent.”

Chantelle Lighting also worked with Village Urban Resort, supplying the lighting for the bedrooms there. The company’s brief was very specific and they were able to supply lighting that perfectly met the client’s needs, as well as being modern and functional.

“With over 25 resorts across the UK, we’re really proud to be associated with the Village Urban Resort brand and its latest development. It is a fast growing and creative chain and we were delighted to be able to work with them to achieve their design ideas.”