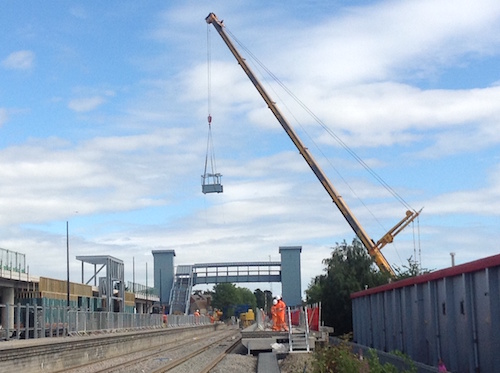 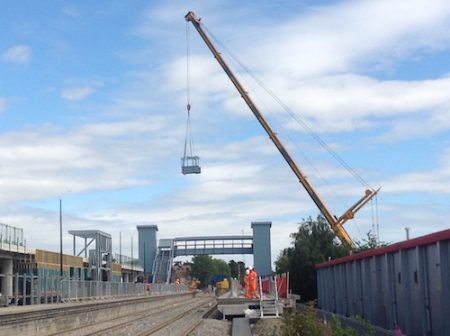 A brand new rail link between Oxfordshire and London has been introduced, running from Oxford Parkway to London Marylebone from 26th October.

Construction of the rail link, delivered through a unique collaboration with Network Rail, began in August 2013, with a joint venture taking place between The Buckingham Group and Carillion, the main contractors whom between them carried out the developments.

Rail News Construction caught up with Graham Cross, Director at Chiltern Railway, to discover some more on the rail project. Graham said:

“Chiltern Railways operates franchised passenger rail services from London Marylebone through Buckinghamshire and Oxfordshire and up to the West Midlands. We have a long term, very different, 20 year franchise that enables us to invest in infrastructure to expand and improve services for passengers and communities.

“We have a long track record of promoting and sponsoring infrastructure schemes, called the Evergreen schemes, and they usually involve medium sized interventions in the railway network to make significant improvements.”

The team at Chiltern Railway identified that there was a huge potential market for rail travel for between Oxfordshire and London that wasn’t being taken advantage of by the existing rail operation. They also realised that Bicester is a hugely growing place, set for significant growth in the near future.

Similarly, Oxford is a very popular place for jobs, however the housing market is extremely expensive, so of course people look for affordable nearby locations to live in and travel to work from – one of these places is Bicester. There was an existing railway between Bicester and Oxford however it was slow. With the knowledge of those different notions, Chiltern Railway identified a thriving market for these links from Oxford to London and Oxford to Bicester; and looked at the existing rail infrastructure, identified its shortcomings and worked out prospects for development.

The Chiltern Railway team also recognised that one of the reasons that Oxford’s rail service underperforms its true market potential is because Oxford Railway Station is rather difficult to get to – navigating through the centre to reach the station presents its challenges.

“So learning from our experiences at Warwick and Aylesbury we conceived the idea of an out of town parkway station for Oxford which has become Oxford Parkway.  It is located beside an existing park and ride site and is well connected to the strategic road network as an existing bus transport hub.

In Bicester there is an enormous designer outlet centre which sells a huge amount of clothes, handbags and shoes to tourists, many of whom travel from China and the Middle East; that did not have its own train station so that was another element of the project with  huge potential.

All of these points came together and it was Chiltern’s decision that they wanted to run trains from London Marylebone over the existing Chiltern route to new stations serving the Bicester village designer outlet and the out of town Parkway Station at Oxford, in addition to the mainline station at Oxford at some point in the near future.

“We identified that once we could arrange trains to and from these locations, we could run Chiltern Railway trains between London and Oxford, although they would be on a different route to the existing Great Western trains from Paddington, which although a couple of miles more in distance – would only be a few minutes more in time.

“We realised that we could significantly improve Oxfordshire’s access to the rail market by having these strategically located in Oxford – we could greatly improve Bicester to Oxford rail links and thus relieve congestion; and also by connecting High Wycombe with Oxford, this would be successful as they are both big towns in this part of the world, and haven’t been linked since the 1960s.”

The Chiltern Railway team set about seeking to complete their mission without calling for government subsidy, because there were so many positives to their ideas of the new rail link. The largest phase is currently nearing completion – the first step is to open the route to enable trains to run between London Marylebone and Oxford Parkway and that opens to the public on 26th October.

“One of the things I am most proud of was the fact that we have abolished all bar one level crossings between Bicester and Oxford which proves a safety improvement and hazard reduction in the area.

“The process of getting consent and approval was the biggest challenge for us! We ran into several issues with ecology and protected species.”

At approximately eight and a half miles of rail line, which ¾ of a mile is a brand new route and the rest is an upgrade of existing railway line – the major construction challenges were regarding level crossings. The two existing routes managed to have an extensive 28 level crossings in just under ten mile length – most of which were unsupervised, path/farm crossings – which was fine for a lightly used 45 mile an hour railway – however Chiltern’s ambition is to get to a 100 mile an hour railway with double track and regular passenger services.

“This has been a great project for us, as it has transformed rail travelling in Oxfordshire, and it doubles the frequency of rail service between Oxford and London, creating the first new railway station in Oxfordshire in 71 years. It is actually the first new rail link between London and a major British city in over 100 years also.

“If you go back 1985 the Chiltern route was in a terrible state and was on the verge of closure, and ever since 1992 the route has been on the up progressively getting quicker and more frequent with a bigger role in the local community; and I see this as the third chapter in that story now.”

Established 12 years ago, Sub-Arc Ltd carry out projects within the rail, construction and marine industry. The company specialises in onsite welding, fabrication, burning, thermic cutting, magnetic drilling and installations. With a workshop backup, Sub-Arc can deliver the package of both fabrication and installation.

Sub-Arc has worked with a number of clients on a range of projects, including Carrillion at Wendover Rail Station, Royal Haskoning DHV, Portwest Construction, Sonic Drilling, Smiths Quarries and Cherwell Council.

“The East West rail project is a vital link in the new growth of Bicester town and a great boost to the local economy. We are based in Bicester so it’s good to be part of a major innovative rail project, right on the doorstep.”

“As a company we pride ourselves on getting the difficult jobs done in both a safe and reasonable time frame.

“A particular part of a project from leaving design stage to final onsite implementation, may present many challenges. We have the ability to adapt, work in a changing situation and offer the client solutions to produce a quality, cost effective outcome to the job.”

In operation for 23 years, Structural Fabrications Ltd offers its services on architectural and structural metalwork at a number of railway stations. The dedicated team ensure a high quality and timely service on all rail projects throughout the UK.

Previous projects that the company has carried out include a refurbishment at Northampton Platform Station, as well as Dunblane Station based in Scotland, whereby Structural Fabrications carried out developments on all of the steelworks, platforms, staircases, bridges and bridge shafts. The company are also currently finalising the Oxford Cambridge East to West link at Bicester and Islip, in which all the steelworks are being completed.

Rail Construction News caught up with Dave Wilson, Commercial Manager at Structural Fabrications Ltd, to find out some more information on the company and their involvements with the Oxford London Marylebone project. Dave said:

“The last development we did for the Oxford London line was whilst working for operating company Buckingham Group and it involved repairing a car park that was metalwork encased. We also landscaped the different floors and metalwork repairs inside the station.”

“It was an important project to us, as is every rail project that we tackle. I’d like to think we were a key part in the repairing process to ensure continuing use of the service whilst minimising disruption to passengers.”