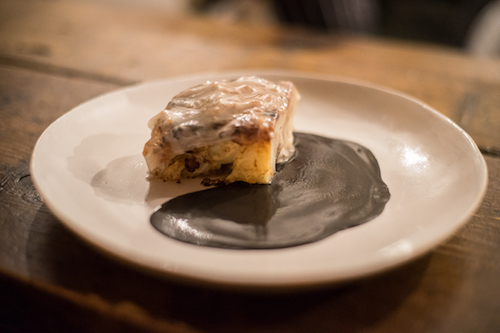 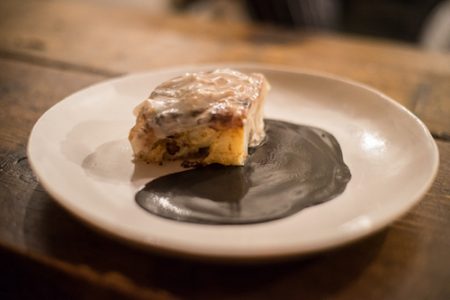 After previous success, Perilla has now launched a four-month residency at Platform 1 wine bar in East Dulwich, which started on 10th November.

Located on Lordship Lane the wine bar has an informal neighbourhood vibe. In partnership with Adam McGurk (Hawksmoor) Perilla has taken over the cocktail bar with its botanical gin cocktails.

Head chef Ben, 23, has drawn on his experience in Michelin starred kitchens under the guidance of Rene Redzepi and Phil Howard to create a menu of playful and beautiful food with British and European influences. Dishes are fresh, seasonal and focus on often overlooked produce, with an unconventional focal point on many dishes.

Ben and Matt aim to bring this kind of cooking out of expensive, traditional restaurants and make it accessible, affordable, lively and informal. Devoted to growing produce for the bar and kitchen Perilla has a herb and vegetable area in the back garden of platform 1.

Ben started his career at Operakaellarens (1*) in Stockholm, at just 15. After completing a 3-year apprenticeship at Claridges, NOMA did a pop-up in Claridges and took him back to Denmark with them. He spent just over a year working under Rene Redzepi at NOMA (2*) before returning to UK. Upon his return he joined Phil Howard’s team at The Square (2*).

Described by Russell Norman as ‘the best dish I have had this year’, diners can expect to try pot roast cauliflower coated in lardo with juiced walnuts, or a boned whole mackerel with wild beach herbs and cucumbers. With the strong emphasis on sustainable foods, and using produce sourced from independent farmers, growers and foragers. Desserts include juiced wild plums and baked custard or poached pears with soft herbs and frozen crème fraîche.

The restaurant seats 40 and features a wine bar focusing on rare and indigenous grape varieties. Reservations are taken for all party sizes.