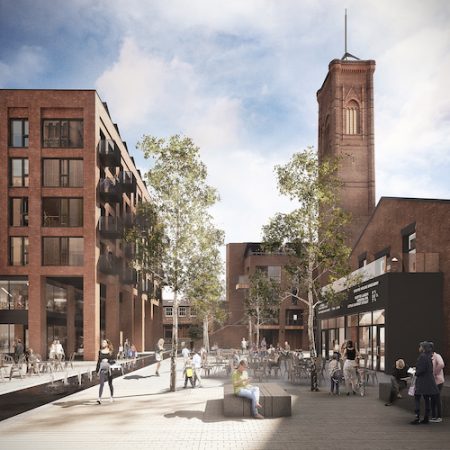 Carillion has signed a contract with the Homes and Communities Agency to deliver the regeneration of Tower Works in Holbeck Urban Village on Leeds’ South Bank.

The 1.17 hectare site is a well-known former industrial location, housing three listed Italianate Towers which lends the site its name. Carillion is set to deliver 90,000sq ft of commercial office space, 24,000sq ft of A1 and A3 retail restaurant and bar spaces alongside a mix of one, two and three-bed apartments and town houses, transforming the site into a mixed-use, sustainable community with a distinctive sense of place.

The combined development value of the proposed masterplan will be in the region of £80m and a site-wide masterplan is set to be submitted for planning approval in the Autumn. Construction works are expected to begin in Spring 2016.

“We’re delighted to sign this deal with the HCA, bringing us another step closer to delivering the regeneration of Tower Works. Our team has been working closely with Leeds City Council and its stakeholders to develop a scheme very much of its place – a high-quality and modern response to one of Leeds’ best-loved historic sites.”

“This is another key milestone in the regeneration of the Leeds South Bank. Carillion’s strong vision for Tower Works accords with the vision the HCA and its partners have for this landmark site, and we are very pleased to enter into contract.”

“Tower Works really is one of the most important of Leeds’ landmarks, with its beautiful Italian towers representing both our rich industrial heritage and our commitment to drive the city forward in a sustainable and imaginative way. This proposed new development could enhance existing plans for Holbeck Urban Village and the wider South Bank area and act as a catalyst for further regeneration.”

In July, Leeds City Council announced Carillion as preferred bidder to develop the listed Engine House complex at the centre of the Tower Works site, which will form part of the overall masterplan and is expected to house an art-house cinema and boutique brewery.

The deal for Tower Works follows on from an announcement that Carillion has signed contracts, secured preferred bidder positions and been awarded frameworks, worth some £1.7 billion, since 30 June 2015.

Carillion was advised on the Tower Works deal by Addleshaw Goddard.