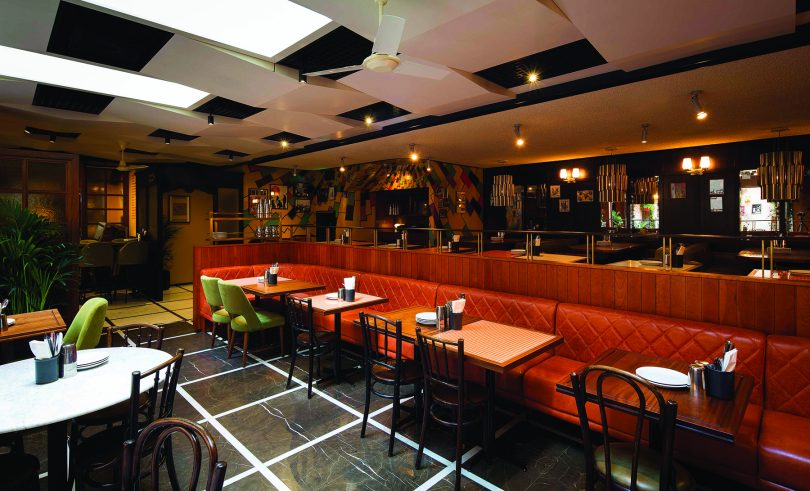 From Bombay with Love 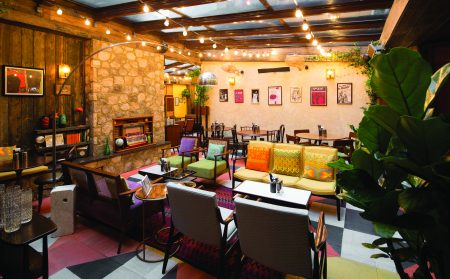 “…It’s 1968. Imagine yourself lounging in a stylish café-bar in Churchgate, Bombay.
Late night, a low light… nearby the young café owner is holding court with a group of friends. They are smoking Simla cigarettes and sharing an illicit bottle of old monk while discussing the recent victory of the savages at the sound trophy contest, and the record they are now due to cut with Asha Puthli. Their English is accented but their threads might not be out of place on Carnaby Street. The jukebox is playing as track by the Stones; for the most part, the singer hits the right notes. For a moment, you ask yourself – is this Bombay, or London, or somewhere in between?”

The Dishoom team have opened a brand new restaurant and bar in London’s Soho.

Located on Kingsly Street, just off Carnaby, Dishoom Carnaby explores the links between Bombay and London and the youth revolution which took place in both cities during the 1960’s. It pays homage to the design and architecture of the period and recalls the Rock ’n’ Roll scene that flourished in Bombay at that time. Dishoom Carnaby is the fourth addition to the Dishoom family, joining existing cafes in Shoreditch, Kings Cross and Covent Garden.

The 7000 sq foot premises is a loving homage to the old Irani cafes of Bombay and will include a Permit Room cocktail bar, several rooms for all day dining, an open kitchen and an enclosed Veranda which can be partially or fully covered for all-year-round enjoyment.

The team spent time with designers Macaulay Sinclair exploring the iconic ‘60’s buildings and areas of Bombay. Much of the Permit Room is homage to the West End Hotel while the black and white chequered terrazzo floor is classic of the Irani cafes and the Carnaby area in the ‘60s. 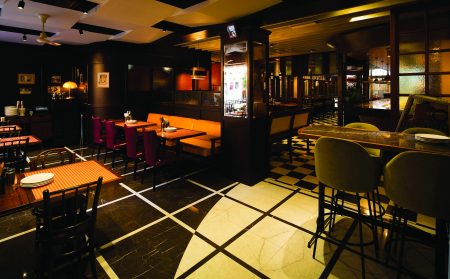 In the front room is a wall whose wooden panels replicate the stone cladding of the Jehangir Art Gallery and contemporary art prints by the Bombay Progressives. The staircase is lined with posters advertising exhibitions of modern art in the 1960’s at Bombays Chemould Gallery.

The team sourced over 150 pieces of antique furniture and fittings from Bombay which have been lovingly restored to furnish Dishoom Carnaby. The furnishings use fabrics by the Indian designer Jyoti Bhomik for Heals in the late 1960s, the floor pattern on the veranda references the geometric design introduced to Carnaby Street when it was pedestrianised in 1973.

Dishoom Carnaby accommodates 196 diners with a further 38 seats on the veranda and 20 covers in the Permit Room Bar. It provides a comfortable all-day space were the Soho community and visitors from further a field can meet, eat, drink, chat, linger, work, study or read.

The open kitchen on the lower ground floor will be open everyday from early until late, serving executive chef Naved Nasir’s breakfast menu followed by his all day menu of small plates, grills, biriyanis, salad plates, rolls and curries. Like the brands other three premises, Dishoom Carnaby has its own signature dish; the Sali Boti – a first rate Parsi classic, their favourite example of which is served at Britannia and Co in Bombay. Tender lamb is braised in a rich and flavoursome gravy and finished with crunchy sali crisp-chips and served with delicate buttered ‘roomali roti’ handkerchief bread.
Begin your day at Dishoom with Breakfast which might be a Bacon Naan Roll, a kejriwal or a big Bombay. Then lunch lightly on roomali rolls and salad plates or linger with a feast. Refresh your afternoon with a drop of Chai and a small plate or two.

As well as a selection of plates, drinks are a plenty thanks to the Permit Room bar. Young British Foodies winner 2014 Carl Brown has dreamt up four new drinks inspired by the 1960s and unique to this site, each of which has a story to tell: The Commander is serious and strong with a dash of scandal, much like the handsome and upstanding commander Nanavati. The drink, in his honour, is a bone dry martini of pepper washed royal dock navy strength gin, Kamm & Sons liqueur and an absinthe rinse. 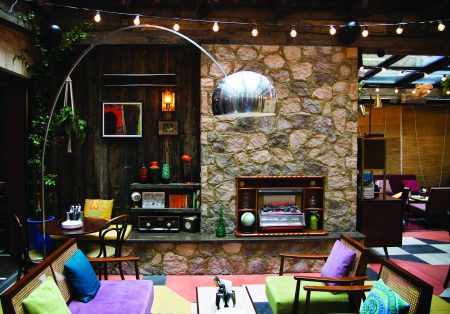 Thunderball is a sloe gin fizz topped with the Cola of Bombay and finished with popping candy. It’ll make you want to dance all night at one of Bombay’s legendary gigs – like the Thunder Ball. The Debonair concocts orange, marmalade vodka, ginger, star anise, bitters and orange cream soda.
Velvette Fogg plays on the classic White Russian. Chai ice cream melts into coffee liqueur and vodka. Decadent and not unlike a dessert, young Bombayites would go mad for this during a morning jam.

While creating a chain of show stopping restaurants, Dishoom drew inspiration from Carnaby’s iconic history. A deeper look unearthed the relationship that flourished in the 60s when western influences kicked off a rocking music scene in Bombay. Bands in Bombay were belting out versions of the latest Rock ’n’ Roll hits while British bands were eager to explore the mystic and exotic sounds of India. The team worked with numerous influential artists and icons of the era, whose photographs and memorabilia now sit on the walls of Dishoom Carnaby.

As the project evolved, the Dishoom team at Carnaby felt that it was natural to create an album. The album, named Slip-Disc’ tells the story of two cities brought together by one generation. It’s the story of two places that might seem worlds apart, but which share a long and complicated history. And, in the ’60s, the young people of London and Bombay found common ground. A delicious quirk of history in which the musical traditions of the east fired up the pop culture of the west, which was in turn travelling east and bridging the gap between. The album is not a history lesson, or a statement of fact… it’s a playful celebration of the mutual fascination between London and Bombay that began in the ’60s – and the music that came out of it. The album is available from the restaurant.

So, if you’re into fantastic food, daring drinks and magnificent music, take a trip to Dishoom.
For more information please visit www.dishoom.co.uk

Taylors Classics are designers, makers and restorers of furniture for the hospitality and leisure sectors. Established over 30 years ago as an antique dealers and restorers, the company has moved along with the times and is now able to offer a selection of bespoke pieces as well as its collection of unique traditional and modern furniture.
Taylors Classics provide furniture for country house hotels, restaurants and gastro-pubs nationwide, working with entrepreneurs to create a unique identity.
Working on Dishoom, Taylors Classics reupholstered and restored a selection of pieces collected from India, as well as supplying new furniture which complemented the authentic pieces.
Roger Belham, Director at Taylors Classics said:
“Dishoom Carnaby was exciting for us because it’s a unique concept with a unique brief. We take pride in working on individual projects and being able to complete a project to the highest possible quality as well as making life easy for the client.
“We pride ourselves on quality of service, design and manufacture.”

Interiors UK specialise in interiors for restaurants, retail units and hotels across the UK. Operating since 2004, the Interiors UK have built up prestigious relationships with clients including Five Guys, Giraffe, The Restaurant Group and AB Hotels.
Working on Dishoom Carnaby, Interiors UK were principal contractors and were involved from the initial acquisition of the premises.
Michael Carroll, Contracts Manager at Interiors UK said:
“Dishoom are an important client to us as they appreciate great design. We maintain brilliant, hands on relationship with the designers Macaulay Sinclair.”
Michael added:
“As a company we pride ourselves on providing the best possible service whilst working in a safe environment.”