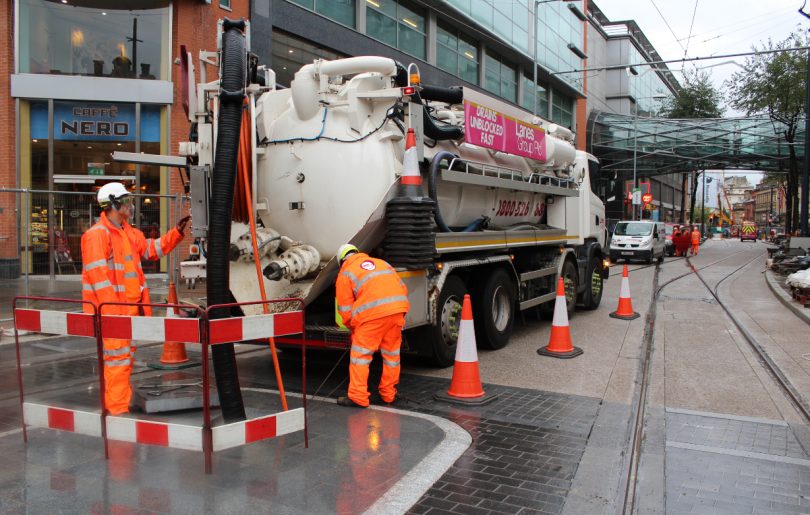 Construction of a second Metrolink tram line through the heart of Manchester city centre is being supported by CCTV drainage surveys and sewer cleansing work delivered by Lanes Group.

The national drainage and maintenance solutions specialist is plotting existing sewers and drains along the line of the 1.3km Second City Crossing (2CC).

Drainage teams from the Lanes Eccles depot are also carrying out CCTV drainage surveys and cleansing new track drainage along sections of the tram line, before they are handed over to service operator Metrolink.

The 2CC line will play a vital role in increasing the capacity, flexibility and reliability of all lines on the Metrolink network across Greater Manchester.

Part of the line, from Victoria Station to the new Exchange Square station, opened on 6 December. When completed, in 2017, the line will continue through Corporation Street and St Peter’s Square to Lower Moseley Street.

Lanes Group is carrying out all CCTV drainage surveys and cleansing work associated with development of the route on behalf of MPT, the consortium building the 2CC line for Transport for Greater Manchester.

Richard Spicer, Site Agent for MPT for the 2CC line said: “Lanes Group has been doing a very good job us, working closely with our teams to clean, survey and identify the location and condition of existing sewers, drains and manholes.

“We value their ability to effectively and efficiently fit in with our work plans on what is a complex construction project in a live environment.

“Their survey and mapping data is essential for helping us design the optimum connections between the 2CC line’s drainage system and the current network.

“We can make sure drainage capacity and flows will be appropriate, and that underground assets are not affected by the tram line, and can take its additional weight.”

Richard Spicer said: “This gave us concerns about the culvert’s structural integrity. Fortunately, although it was a large culvert, we could establish that water flow though it was low and would remain so.”

MPT was given authority by Manchester City Council, which owns the asset, to channel water at the location through two 225mm diameter pipes and fill the void above with concrete, to ensure the culvert was structurally-sound.

Simon Roberts, Area Development Manager for the Lanes Eccles depot, said: “We have built up a great deal of expertise in supporting tram development and maintenance through our work with Metrolink, and other projects across the UK.

“We are pleased to be supporting a public transport system that will make such a difference to the people of Greater Manchester.

“In many cases, this is the first time sewer and drainage assets have been mapped. It can be a mystery every time we open a manhole. Our teams have to work quickly, smartly and safely to ensure MPT gets the data it needs to help plan the next stage of its works.”