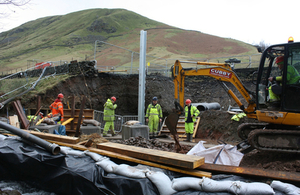 Construction work on a vital project to repair the A591 in Cumbria, which was badly damaged in December’s storms, is moving on apace with the installation of the first of around 20 steel posts which will be used to help re-build the road.

The government has committed £40 million for the reconstruction of roads and bridges in Cumbria and Lancashire, and has brought in Highways England to restore the A591 so that it can be reopened by the end of May.

Last month, Kier Highways was appointed as the main contractor for the project to rebuild the A591 at Dunmail Raise, which was washed away in the storms, and the main construction work started last week.

The posts are being fastened to the bedrock at the site and will be used to build a new retaining wall in the beck at the side of the collapsed part of the A591.

The vital Lake District tourist route, which stretches between Grasmere and Keswick, has been closed between St Johns in the Vale and Dunmail Raise since December following significant damage caused by storms Desmond and Eva.

Chris Holehouse, Highways England’s senior project manager for the scheme, said: “We’ve made real progress since starting the main construction work last week and the latest pictures from the construction site show how the retaining wall is already starting to take shape.

“We’re working closely with Kier Highways, Cumbria County Council and its contractors to do all we can to get the A591 repaired and reopened as soon as possible, following the extensive damage caused by December’s storms.”

Once completed, the new retaining wall will provide greater protection to the road from the effects of erosion. It will be built using 4.5 metre wide concrete panels which will be supported by the steel posts. More concrete will be poured behind the panels up to a thickness of 3.5 metres.

The wall will also be covered with local stone so that it looks like a dry stone wall and blends in with the local landscape.

So far, Kier has removed all the loose rocks and stones from the edge of the beck, created strong foundations for the concrete wall panels and installed some of the steel supporting posts.

Drivers, businesses and local residents can stay up to date by visiting the scheme website where they can also sign up to receive email updates about how the project is progressing.