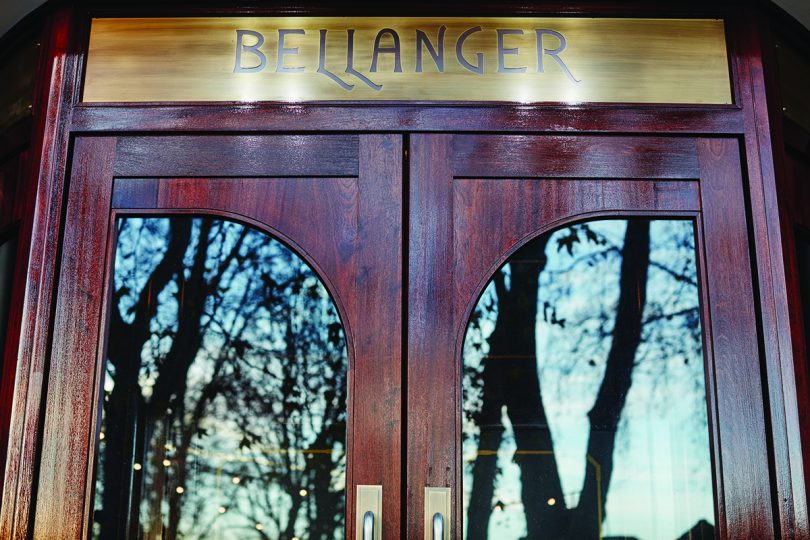 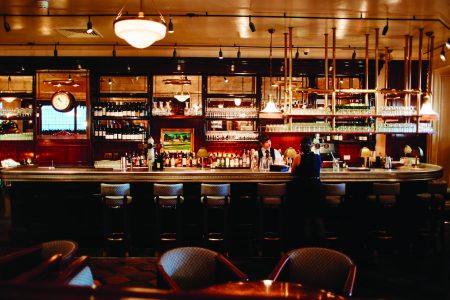 Inspired by the original Alsatian brasseries of Paris, Bellanger, in Islington Green, London, is a classic Brasserie has just opened.

This relaxed, all-day, traditional French restaurant has been created by celebrated restaurateurs Chris Corbin and Jeremy King – the team behind The Wolseley and Brasserie Zédel.

Main contractors for the project to create the new venue were WFC Contractors.

Bellanger is open seven days a week, mid-morning until late, whether for breakfast, a simple cup of coffee with cake or a ‘grand repas’ of escargots a l’Alsacienne, tartes flambées, choucroute garni and Gugelhupf ice-cream.

The Front Room features large, fold-back windows looking out onto the Green. A long bar, with high bar stool seating and standing room, leads to the intimate, carpeted Upper Room.

The venue can accommodate 195 inside plus 24 on the outside terrace. There is also a semi-private dining table set within an alcove for up to eight people
Seating includes booths all down one side, plus 10 seats for counter dining and a large dining room towards the rear of the interior. 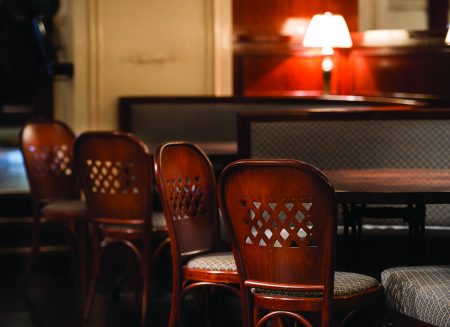 Led by head chef Lee Ward, the restaurant is principally French-based, with a focus on the wines of North Eastern France and the border region with Germany. Typical dishes include, choucroute, baeckoff, coq au Riesling, soups, salads, seafood, plats du jour and a number of sharing dishes.

A notable selection of wines by the glass is served, as well as traditional dark and blonde Alsace-Lorraine beers on tap, including a range of monastic beers.

Chris Corbin and Jeremy King have been partners in business for over 30 years. During that time they have created some of London’s most iconic and best-loved restaurants and have contributed a significant chapter to London’s restaurant history.

Corbin & KIng (formerly Rex Restaurant Associates until January 2014) was created to manage the future expansion of the company’s interests and to focus on new opportunities in London and abroad, as well as manage the existing portfolio. 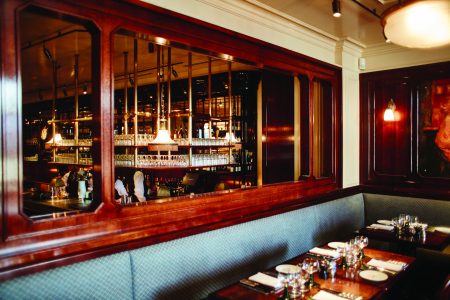 One of Noble Russell’s latest projects ‘Bellanger’ opened last year on Islington Green. Designed by BradyWilliams, for acclaimed restaurateurs Corbin & King this has been a fantastic project for Noble Russell to have been involved in. Bellanger continues Noble Russell’s ongoing association with Corbin & King having previously worked on Fischer’s, Cafe Colbert, The Wolseley and Brasserie Zedel.

Inspired by the original Alsatian brasseries of Paris, Shayne Brady of BradyWilliams has designed a beautiful yet relaxed all-day, traditional French restaurant which is an excellent addition to Corbin & King’s list of iconic London restaurants.

Noble Russell developed and manufactured over fifty bespoke tables for this project. Table tops were provided in a mixture of oval, horseshoe and rectangular shapes, and are finished with a bespoke laminate central panel, they have been stained and high gloss lacquered with a solid sapele edge lipping, they all stand on cast metal continental bases. In addition to the tables, ten upholstered bar stools with brass details were specially adapted for the counter dining area.

The completed Noble Russell furniture truly complements this stylish new restaurant designed by BradyWilliams and is destined to be the next place to be seen in Islington.

More information on Noble Russell can be seen on their website: noblerussell.co.uk.