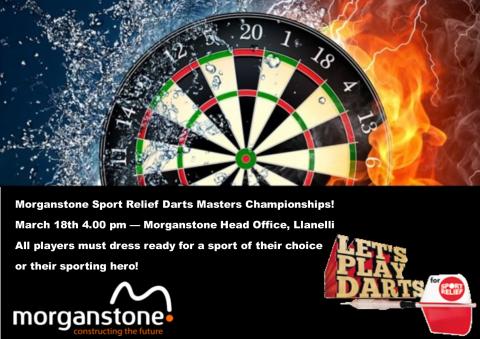 Staff at construction company Morganstone will be continuing their successful charity fundraising campaign by supporting Sport Relief 2016. They will be aiming to emulate their sporting heroes in more ways than one Today (Friday 18 March ) as they battle it out to be crowned the company’s darts king or queen in aid of Sport Relief 2016.

The Sport Relief Darts Tournament 2016 will be held at the company’s Llanelli office. Staff will have to dress up as their sporting hero or in general sports gear to participate in the event.

Sport Relief is an annual fundraising event that encourages everyone across Britain to get active while raising money to help people in the UK and all over the world. Half the money raised will go to charities in the UK while the other half will go to some of the poorest communities globally.

In the last two years money raised for Sport Relief has funded more than 700,000 children to receive life changing vaccines, 189,000 to attend school, and, in the UK, it has funded 23 projects to support people living with dementia.

Antonia John, Community Engagement Manager for Morganstone, said: “We are very passionate at Morganstone about raising money for charity as a team and getting involved in events that help people not just in the UK but globally as well. Everyone is really looking forward to the darts tournament and hopefully we won’t end up with pin holes around the darts board!”