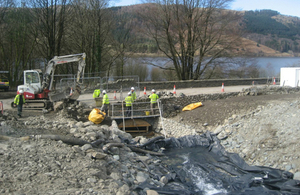 A bridge which carries a stream under the A591 and into Thirlmere reservoir is being repaired after it was badly damaged during December’s storms.

Contractors for Highways England have completed the arch and most of the retaining wall for Hollin Brow bridge, which was no longer suitable for vehicles following the floods. A new road surface also needs to be laid on top.

Highways England has been brought in by the government to repair and reopen the A591, including a large section at Dunmail Raise which was washed away in the storms.

A new 106 metre retaining wall is being built in the beck alongside the part of the A591 which collapsed – a distance which equals the length of a football pitch.

Chris Holehouse, Senior Project Manager at Highways England, said: “Our contractors are making really good progress along the A591, and are continuing to work 7 days a week so that the road can reopen as soon as possible.

“The repairs that are being carried out on Hollin Brow bridge will direct storm water from the hills into Thirlmere reservoir, as well as ensuring the bridge can take the weight of vehicles travelling over it.

“Work is also well underway on a new retaining wall along a 100 metre stretch of the A591 at Dunmail Raise that was washed away in the storms.”

Contractors have installed steel supporting posts and concrete panels along around half of the new retaining wall at Dunmail Raise so far, and nearly a third of the panels have had concrete poured behind them up to a thickness of 3.5 metres.

Stone masons have also started putting local stone reclaimed from the flood debris along the wall to cover the concrete, to ensure the wall blends in with the local surroundings.

The final stage will see a new road surface laid and, once completed, the wall will provide greater protection to the road from the effects of erosion.

The main construction work to repair the A591 started last month following the appointment of a contractor, surveys and some preliminary work on the site.

The vital Lake District tourist route, which stretches between Grasmere and Keswick, has been closed between Dunmail Raise and St Johns in the Vale since December following significant damage caused by storms Desmond and Eva.

More than 1,000 drivers, businesses and local residents have signed up to receive regular e-bulletins about the work to repair and reopen the route.