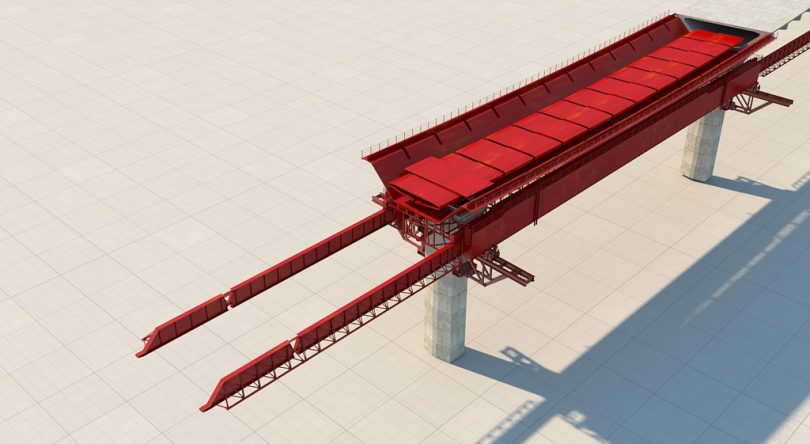 A second movable scaffold system (MSS) is on its way to Halton.

The machine will be used to build the south elevated approach viaduct, which will connect Runcorn’s main road network to the Mersey Gateway bridge.

The new MSS is the same specification as ‘Trinity’, the machine that is currently building the north approach viaduct in Widnes, except it will be red rather than orange.

When fully assembled, it will measure 157m long – the length of around one and a half football pitches – 8m high and 22m across at its widest point. And at 1700 tonnes, the steel structure will weigh the equivalent of 140 double decker buses.

As no UK companies currently have the skills and expertise to design, build and operate a machine of this specification, Merseylink had to look further afield. The MSS currently being manufactured in China and is due to arrive in Runcorn over the next month.

Workers will begin to assemble the MSS on site at Astmoor in the summer. The new machine will be assembled around the first pier of the approach viaduct, approximately 12.5m above the ground.

Construction joint venture Merseylink decided to deploy the additional machine to save valuable time dismantling, then transporting and reassembling Trinity on the south side of the river.

Richard Walker, Project Director at Merseylink, said: “On a project of this scale, a degree of flexibility in the programme is always needed so we can make improvements when necessary. Bringing in another MSS will provide additional resilience and ensure that we remain on track to open the new bridge in autumn 2017.”

Halton schools are being invited to take part in a competition to name the machine, which is due to start work on the south approach viaduct in September this year.

Mr Walker added: “It will be incredibly exciting to have two giant machines like this working on the project at the same time. The team is really looking forward to hearing the name suggestions that we get from local children here in Halton, so we can launch the new MSS just like we did with Trinity.”