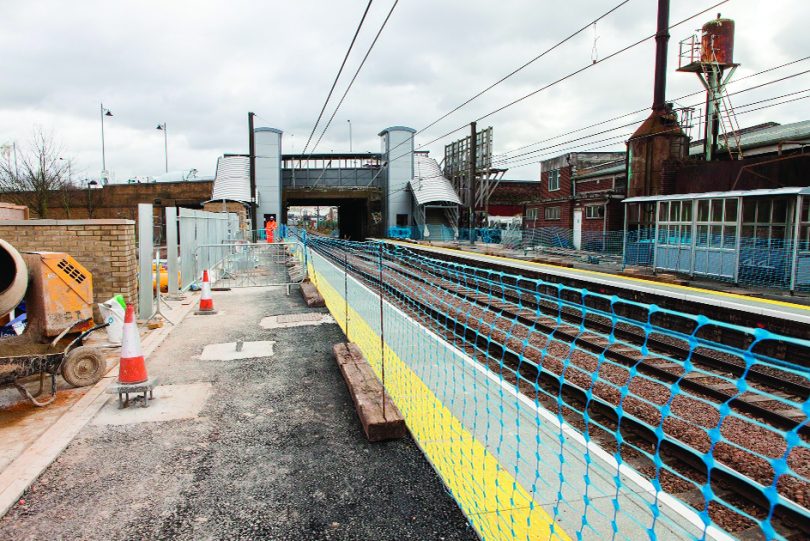 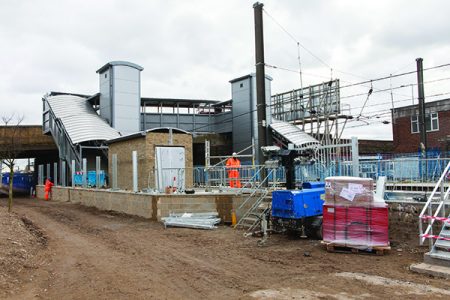 After over 30 years of closure, Lea Bridge Station in east London’s Leyton has been officially re-opened, following a major redevelopment project led by Waltham Forest Council and a cash injection of nearly £12m.

The station lies just to the north of Queen Elizabeth Olympic Park and on the edge of the Lea Valley Regional Park.

The reopening will help kick-start ambitious regeneration plans in the Leyton area and is expected to serve over 350,000 passengers a year by 2031.

Providing direct links to Stratford and Tottenham Hale, the station gives passengers journey times as short as five minutes, compared to the 40 minutes these journeys currently take by bus.

Years of under-investment had also seen the station fall into disrepair at platform level, with most of its shelters and furniture long since removed. The station building ultimately succumbed to fire, rail track was ripped up and the platforms became increasingly overgrown.

The redevelopment included the construction of a new building housing two new platforms, a new footbridge and lifts, station canopy, ticket vending machines, Oyster readers, waiting shelters, help points and cycle storage for anyone getting there by bike.

Network Rail managed the construction of the station, while work on the ground was delivered by VolkerFitzpatrick as the main contractor.

Andy Gardner, Rail Infrastructure Operations Director of VolkerFitzpatrick said: “This major refurbishment has been a great project for us. Building the new station next to the operational railway involved engineering and safety challenges, but by working collaboratively with Network Rail and Waltham Forest Council we were pleased to see this vital link between north-east London and Stratford being opened.”

“We were very excited to reopen Lea Bridge Station after 31 years. Not just for people already living in the Leyton area, but for the businesses nearby and investors who are interested in this part of our borough.

“There’s huge scope for growth in Leyton and Lea Bridge and we’re already working on a masterplan to look at how we can unlock its potential. The station forms a central part of our vision which will include a mix of desperately needed housing, retail and leisure space, and employment opportunities. We’re already in talks with investors and are in a position where we can choose the kind of investment and projects we think are best for our borough and residents – it’s really exciting.”

Rail Minister Claire Perry said: “Lea Bridge Station is a great example of how our record investment in the railways and partnership working with local authorities and industry is delivering better journeys for passengers and boosting local economies.

Richard Schofield, Network Rail’s Route Managing Director for Anglia said: “Rail is vital to the UK’s economic growth. I’m proud that we’ve delivered this fantastic new station that will help boost the local economy by connecting thousands of passengers to two of the capital’s key transport hubs, enabling them to move around London faster and improving links for local businesses.”

Services at Lea Bridge Station will be run by Abellio Greater Anglia, who operate a number of train services across London and the South-East.

Jamie Burles, Managing Director of Abellio Greater Anglia, said: “The reopening of Lea Bridge Station will make our rail network more accessible and convenient to thousands of existing and potential rail passengers. The development of the station has been a great partnership project between the London Borough of Waltham Forest, Abellio Greater Anglia, Network Rail and the Department for Transport.

“With half hourly services, seven days a week, in both directions to Stratford and Tottenham Hale, the new station enables local residents to have easy access to rail journeys into and across central London and beyond; up the West Anglia route to Stansted Airport and Cambridge; up the Great Eastern Main Line to Chelmsford, Colchester, Ipswich and Norwich; and of course to Stratford International Rail Station for Eurostar services to France and Belgium. We hope the station will prove to be a great success.”

The project is thanks to solid partnership work and a mixture of £5.3million in council capital funding, £1.1million from the Department for Transport’s New Stations Fund and £5.5million from Section 106 contributions (managed by the Stratford Transport Implementation Group).

Established in 2007, Pod-Trak is a multi-disciplinary rail company, offering a second to none service to its clients, delivering projects through a single management team that adds value and reduces risk. The company specialises in all aspects of rail electrification, permanent way, civil engineering and communications.

Rail Construction News spoke to Mahesh Patel, to find out more about the company and the project on Lea Bridge Station. Mahesh said:

“Pod-Trak were contracted by Volker Fitzpatrick to deliver the permanent way works, which included early involvement in the planning process with the VFL engineering team. The onsite completion of the planned works took place safely and on time; engineering support following the blockade, which included track monitoring and stressing.

“As a company, Pod-Trak prides itself in building long-term relationships with clients, which are based on honesty and integrity. We are always prepared to ‘go the extra mile’ to ensure that we exceed our clients’ expectations and deliver projects that are to the highest standard.”