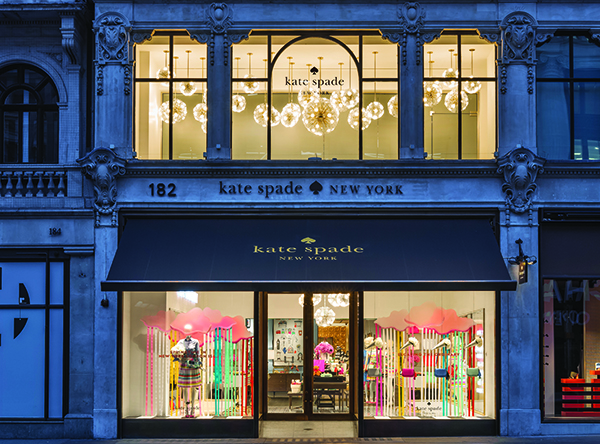 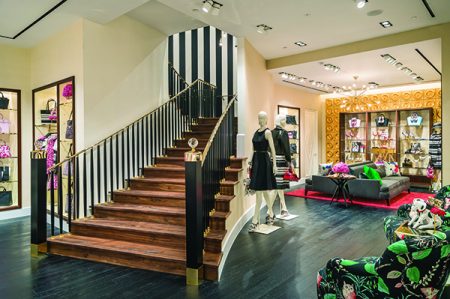 Totalling over 4,000 square feet, the new store houses not only the kate spade new york retail space, but also offices and conference facilities for the brand’s corporate staff.

Created within a former Esprit unit, the new store reflects the distinctive style of the brand, known for its crisp graphics, exuberant style and playful sophistication.

The store’s two level façade features large display vitrine windows on either side of a gracious central doorway on the first level, while the upper level contains 30 sputnik style signature light fixtures of assorted sizes hung at various heights. The resulting effect is an explosion of white light behind the dignified and traditional façade typified by the Regent Street location.

The interior design was created by kate spade new york’s in-house team working with Househam Henderson architects, with the interior fit out being undertaken by Portview Fit-Out.

A stunning highlight of the interior is a spectacular curved staircase, the fitting of which required an extensive section of the first floor to be cut out.

The staircase itself was created collaboratively by the client and contract teams from construction drawings, then fabricated in steel, with walnut treads and handrails and installed in sequenced phases in order to meet the tight timescales for completion.

Another striking design feature is a unique treatment on the upper level of the store, which has been created as a stage set of an apartment with an outdoor patio that has view of a New York Skyline through a signature black and White Striped Cabana surrounded by Boxwood hedges.

The interior design also features bespoke joinery and cabinetry designed in the U.S. by American Millwork and Cabinetry, and fitted by Portview within only two weeks – all the time available in the schedule to accomplish this.

Other kate spade new york’s signature touches include quirky London influences, such as miniature red double-decker buses and black cabs on the store shelves, mirrored ceilings and glittering wallpapers (part of the brand’s own décor range). 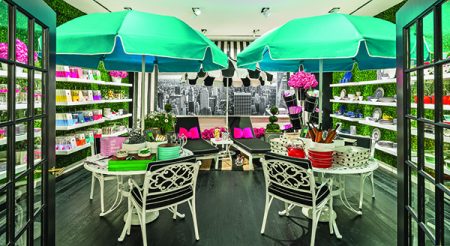 Reflecting the building’s heritage as a former home, further design elements include features such as hand-painted floor-to-ceiling stripes on curved walls surrounding the staircase, giving an informal feel.

Challenges overcome in the project included communication between the project team across multiple time-zones – and the presence of 1,000 people employed in offices on the upper floor of the building. This meant that deliveries of materials had to be restricted to a two- hour window every morning and fit-out works had to be carried out to a strict timetable.

Simon Campbell, Managing Director of Portview Fit Out said: “This was our first involvement with kate spade new york and it was their first high street opening in the UK. We worked with the kate spade new york American team through local project managers Househam Henderson, in delivering the client’s major investment in the UK.

“This was quite an extensive project. The works involved stripping out the original store and creating the new retail interior, which included the installation of a major feature staircase. This involved a complex fabrication process, as well as creating a new opening for the staircase and was probably the most challenging part of the project. Fortunately our team are well-skilled in taking clients’ requirements and engineering them on site to ensure a successful outcome.

“In addition, the works included the creation of a large new sales area which was divided into different zones with a variety of different retail offerings. New office accommodation for kate spade new york’s UK operation also was created on the floor above.

“I think that the project worked very well and was, overall, a very positive experience for all concerned. “According to the post-completion report which we received from the client, they are really delighted with the finished project and were also impressed by our collaborative style of working. We look forward to having the opportunity to work with them again.”

“We remain focused on our two key axes of growth – geographic expansion and product category expansion – and selected the Regent Street location based on customer demand and existing success in this market,” said Craig Leavitt, Chief Executive Officer of Kate Spade & Company.

“This progress further establishes our foothold in the European region as we move toward our vision of becoming a powerful, global, multichannel lifestyle brand.”

Kate Spade has recently been shortlisted for a Retail Week Interiors Award 2016.