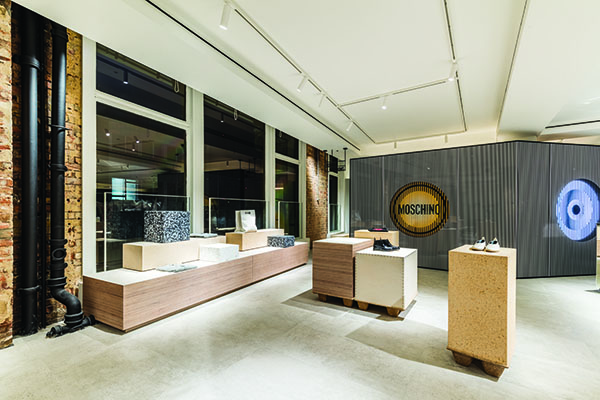 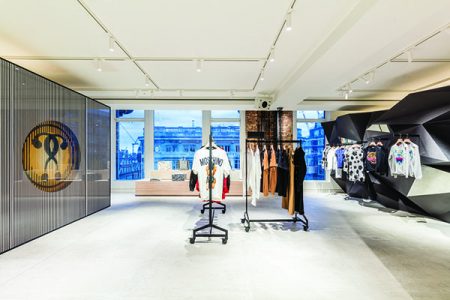 Harry Gordon Selfridge once said ‘Develop imagination, throw away routine’ which is what Campaign accomplished when creating the ‘Theatre of Forces’ for the new Designer Studio, situated on the 3rd Floor of the Classic East Building. Selfridges Design Studio houses a unique mix of established and new-to market designers, driving the global fashion agenda for progressive, contemporary womenswear.

The Selfridges Design Studio follows the same sensibility as a gallery space. The architectural envelope creates a holistic studio feel allowing brands to present their unique characters within the environment. The space consists of Selfridges own edit and 5 anchor brand spaces, spanning over 17,000sqft. The architectural mood is a juxtaposition of raw and exposed, contrasted with classic and refined.

Honest, Curated and Considered define the principles of the architectural envelope. Follies punctuate the space, lending itself to a curated gallery.

Traditional coffered ceilings with a new modern perimeter of articulated beams, are brought together using concrete effect tiling; a key element in providing continuity across floor. Round columns have been reinstated within the Selfridges edit, and the brand mats expose existing concrete columns. By opening up six of the closed windows, we have allowed natural light to flood the room, highlighting all features.

As for the fitting rooms, CAMPAIGN have introduced a playful and bold concept within the interior.  Curated furniture, painted OSB walls and satin brass ironmongery hint at luxury.  The Stylist Fitting room is a sanctuary of mid-century furniture, with subtle pink hues, and takes advantage of its corner location looking out over Oxford and Duke street. Forces come in to play with bespoke printed drapes, spanning across the fitting rooms, providing perfect backdrops for those ‘Selfie’ moments.

Throughout the space we have collaborated with a selection of progressive artists to commission Follies; whimsical and unexpected structures. Inspiration behind these Follies is a ‘Theatre of Forces’. A curated collection of architectural follies each with a singular, clear expression has been designed to adhere to three design principles; Artistic, Customisable and Functional. Challenging the boundary of art and retail, each express the individual creativity of the following artists Gary Card, Artisan, Patternity and Anna Lomax, as well as acting as a tool for selling. 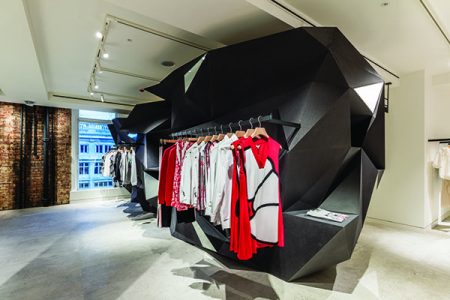 Founded in 1980, Sunbeam Group began its life based in North Acton, renting small office space and workshops to provide joinery and shopfitting services. Since then, Sunbeam Group has blossomed into a widely recognised metalwork and joinery business known for their high quality bespoke fittings.

It is because of their ‘one stop shop’ proposition that they have had such success in previous years, such as work for Berkeley Homes, CP Hart Showroom, Ottolenghi Deli and Metro Bank.

The company regularly work on projects for Selfridges up and down the country, it is because of this that Sunbeam Group has enjoyed such a close working relationship with Selfridges on the Design Studio project – where they supplied and fit specialist fixtures and fittings.

“It’s so important to be involved with this project because Selfridges are such a prestigious client, all projects involve using innovative materials and concepts – they’re a leading player in retail design and story experiences”

“We pride ourselves in a proactive ‘can-do’ approach to successfully deliver on the client and designers expectations. Having both joinery and metalwork production in-house we can offer a service and flexible approach that can’t be matched by many other millwork contractors.”