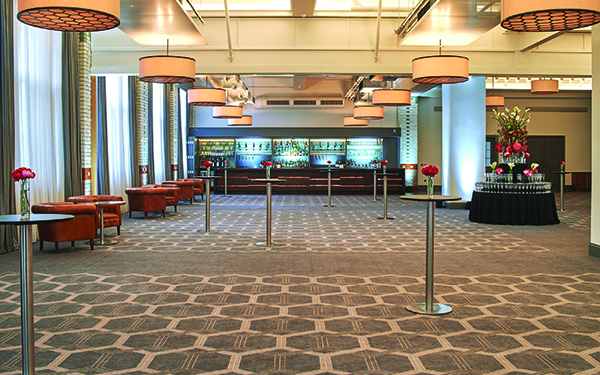 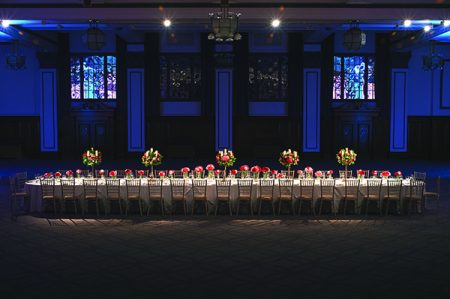 The Palace Hotel, Manchester, has undergone a £7 million refurbishment programme by PH Hotels that began in May 2015.

This redevelopment is part of a £200 million planned upgrade to the portfolio of hotels across the UK owned by Starwood Capital, the American investors who bought the property last year and became a shareholder in PH Hotels in 2013.

The Grade II listed hotel is a striking part of the Manchester skyline with its clock tower and Victorian architecture. The refurbishment and overall design was implemented in order to retain the majority of the hotel’s fitting and fixtures in order to keep its charm.

Main contractors, HC Contractors, worked on the development and provided the full refurbishment which included all of the 270 bedrooms and bathrooms, the Grand Ballroom, all conference suites, the external terrace, the main reception, and the new bar and restaurant. HC Contractors also renovated all of the corridors and grand staircases, and installed three of the commercial kitchens, which included new M&E infrastructure to the public areas.

Mark Caine of HC Contractors commented: “The rooms are beautiful, keeping their original features, the design contemporary and the public spaces take your breath away.”

Due to open in September is the hotel’s new bar and restaurant ‘The Refuge Public Bar & Dining Room’. Run by the owners of the Manchester restaurant Volta, this new restaurant will be the heart of the Palace Hotel.

The all-day food and drink offering will include coffee, brunch and lunch, as well as afternoon tea served in the Winter Garden, when the restaurant opens later this year. With the appointment of a brand new team of chefs for the hotel, the bar and restaurant will be an exceptional dining experience for guests and visitors.

The new executive Chef Steven Wilson has a had a career that’s taken him around the world working with some of the world’s top chefs including René Redzepi, Pierre Gangaire and Raymond Blanc. Heading up the entire food and drink section at the hotel, he will work with the Refuge Bar & Dining Room team as well as the banqueting brigade, which provides food all 17 of the hotel’s private dining and events spaces.

Alex Worrall is the new head chef for the Refuge and has a background in the world’s most exciting restaurants as well as many small independents including Red in Westhaughton, Victor’s in Hale and Reform in Manchester. Paul Speakman is the new banqueting head chef and has a 23 year long career that includes working with Marco Pierre and Simon Rimmer. 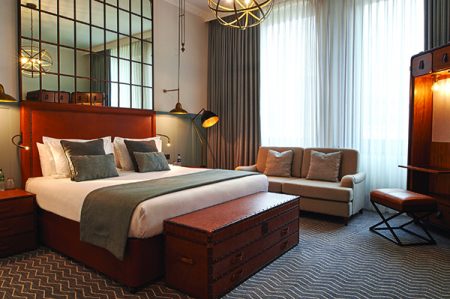 Due to the multi-million pound refurbishment, the Palace Hotel re-launched its grand wedding and event spaces. The Grand Ballroom has been newly restored with its art-deco features and accommodates up to 750 seated guests. Boasting high ceiling and natural light, its ornate design has been protected throughout its upgrade. The Whitworth Room has retained its original tiled features and striking columns whilst now proving as a new pre-function space for the Ballroom or for private hire for up to 250 guests. In addition, the Directors’ Room, which is accessible by a marble and oak-panelled ornate staircase, is available for events between with 60-100 people.

The renovation of all 17 conference, meeting and private dining rooms has allowed the hotel to re-launch them for availability. Combining modern technology and contemporary décor with Edwardian features, the function spaces are ideal for most events.

Whilst the renovations were taking place, the hotel was still in use. “It was also hugely important to consider the operational needs of the hotel for both guests and staff as the refurbishment was carried out in a live environment,” commented Mark.

The hotel is a large part of Manchester’s history as the building itself was completed in 1895.

“HC Contractors are extremely proud to be involved in the refurbishment of the Palace Hotel,” said Mark.

He added: “The feedback from the client, operator and guests has been fantastic. It has been a tremendous success. It was a pleasure to go back to the hotel and be received so well.”