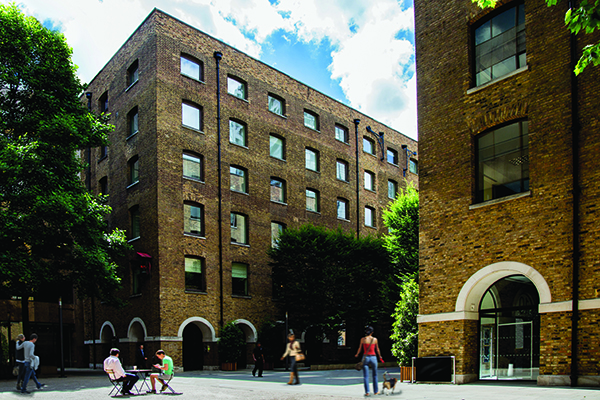 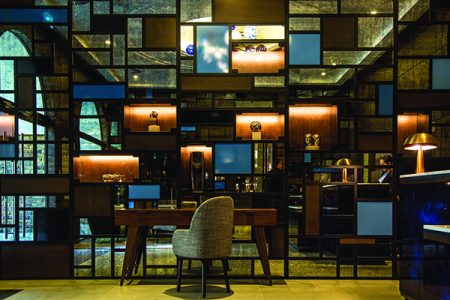 A private members club that opened in June of this year has already gained critical recognition with a European Hotel Design Award nomination in the ‘Adaptive Re-use’ category. The Devonshire Club, located in the heart of London, was part of a £25m renovation to its site in Devonshire Square.

Occupying all six floors of a listed nineteenth century warehouse, the Club is an exclusive space for men and women working in and around the City to connect and relax. Run by CEO Brian Clivaz, one of the most celebrated figures in the industry, the Devonshire Club ultimately aspires to be one of the leading private members’ clubs in the world.

Having previously worked with Brian reinvigorating The Arts Club, March & White were brought in to design the luxury interior. Co-founder James White spoke to Premier Hospitality about the thought process behind the design and the features implemented:

“Our instinct for Devonshire Club was to create an elegant and iconic destination. We always knew who our muse was. She was cool, confident and effortlessly stylish. It was important that the interiors tell a story. We imagined she might fly in on her private jet for a meeting in the City. A glass of champagne at the Club. Timelessly glamorous. We obsessed over the details. Would she sit in that chair? Would she use that handle? We wanted to ensure the design would satisfy, and surpass, her understanding of glamour and style – the essence of the Devonshire Club woman!

“The early mood research channelled a very fresh European aesthetic. We looked to classic cinema and fashion from the fifties and sixties. This became distilled with something entirely contemporary.

“We assembled a cool palette with dark oak, an abundance of feature stone, mirror and stained glass for the Ground Floor. These finishes evoke a mid-century elegance. When progressing up to the first floor and bedroom levels, the base changes to a warmer palette of teak and golden walnut. This subtly intensifies the mid-century feel.”

“The commitment to bespoke design throughout the Club makes it truly unique. As you enter you have the Murano glass chandelier we designed with Brian and in collaboration with Seguso. The base interior architecture has quite a mid-century look. You’ve got timber wall panels, a nod to traditional members clubs reinterpreted in a modern way. We worked closely with Nattier, the Italian textile design house synonymous with the Golden Age of European couture throughout the sixties; we used that as inspiration to create this colour and pattern that layers on top of the mid-century architecture.

“As you move through into the bar areas, the colour increases through the rugs and cushions. When you move up to the first floor the timber moves into a warmer palette of teak and golden walnut. This subtly intensifies the mid-century feel. If the ground floor is glamorous then the first floor is more relaxed. Even the library bar, for example, was designed to have this softer feminine layer to it. It’s not what you would call a traditional library look – we’ve gone for a lighter palette and more contemporary versions of wingback chairs.

“The level of bespoke design is very unusual for a project like this; it takes time and needs a brave client. Some of the pieces we’ve created added complexity to the project but it does make it unique.”

Working on the Devonshire Club, Hakwood was responsible for the manufacture and supply of bespoke wood flooring.

Within the meeting rooms, suites, bar areas and staircases, there is bespoke Hakwood flooring in chevron, brick and herringbone patterns. In the restaurant and champagne bar, collection flooring was selected.

Other prominent features include stain glass windows by designer Harry Cardross and a reception desk made by Based Upon finished with beautiful blue resin. The overhaul of the 58,000 sq ft building was managed by development property consultancy SUSD.

The European Hotel Design Award nomination comes only a few months after trading began. Founder membership costs £2,400 while a ten year debenture membership is priced at £24,000. 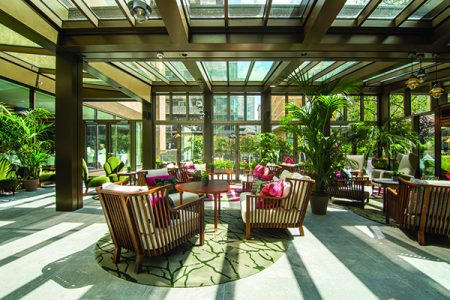 FWUK Furnitureworks is an 11-year-old specialist furniture designer & manufacturer, based in Sussex England. Working with the best designers in the UK, FWUK take ideas for chairs and sofas and turn them into working products, specialising in the manufacture of chairs that not only look amazing, but will also stand up to life in a commercial application.

You will find FWUK’s chairs not just in hotels and bars, but in homes and even on board superyachts, and in the last year alone FWUK have made chairs for many top London restaurants and hotels including the Ivy. Most recently, FWUK has been involved in the Devonshire Club.

Working closely with Designers March and White on the Devonshire Club project, FWUK pulled off some truly stunning chairs.

“The FWUK factory prides itself in the products it makes for quality venues and the Devonshire Club is up there with the best of the best. All the team at FWUK are proud to have been involved in such a prestigious project.

“We’re currently working on another stunning London project with Designers MBDS, The ‘Aquavit Restaurant’, which is due to open in a few weeks’ time and features over 200 pieces made by FWUK.”

Company director Kevin Baker also owns the well-known brand ‘Chairmaker’, which is based at the same location in Sussex, and believes he has the largest collection of production-ready chair designs in the world.

For designers who don’t want to design their own products, Kevin will probably have something to do the job. Kevin’s factory employs 25 highly skilled people and has fantastic facilities.