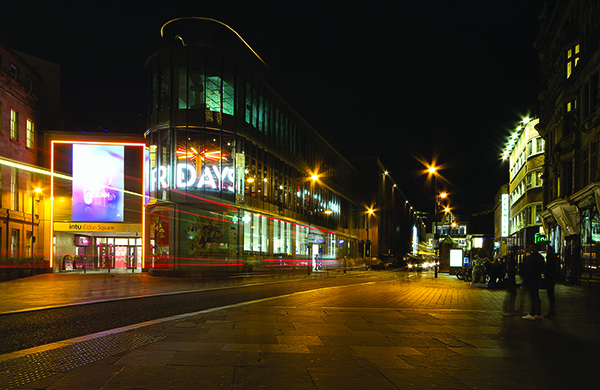 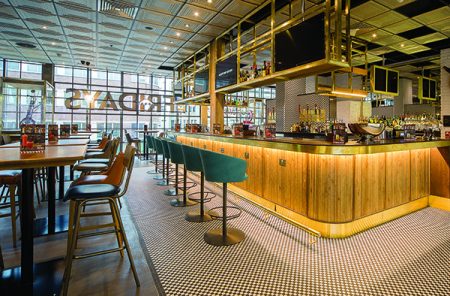 Guest at TGI Fridays in Newcastle became the first in the UK to experience the award-winning American restaurant chain’s new concept in October when the brand’s Eldon Square venue opened.

The first alteration of its kind during the brand’s 30-year UK history, Eldon Square features a spacious and relaxed bar and lounge area, a bespoke all-day menu and live music from Fridays’ first stage and performance area.

This is the fourth restaurant in the area for the brand, with the other three proving there is a large appetite in the region for the unique dining experience. Eldon Square was therefore the perfect place to implement the new concept, with design agency Harrison brought on board to develop it. Jake Griffiths, Designer at the firm, spoke to Premier Hospitality about the project:

“We were approached by the client initially to come up with a new look and feel for them. From their market research they were looking for a design which would appeal to a more millennial audience. Newcastle is the first site to get this new concept and others will follow soon.

“Another key point is that this is a high street concept so even though it is within a shopping mall, it has got a very prominent exterior view right in the centre of the city. The exterior and how that looked was therefore crucial. The exterior definitely stands out and we needed to do that to attract maximum attention to it. Moving forward, the other sites are a mixture of retail and traditional city shopping centres.

“The building itself was somewhat of a challenge in that we had a big, bricked-off central stairwell that initially separated the spaces so in a way it prompted the ‘old to new transition’ idea. As you’re walking through it’s a seamless blend.”

From developing the concept to completion, the project took four months. A new spacious, light lounge and bar area gives the restaurant a versatile edge where guests can work and relax with a coffee or enjoy live, up and coming musical talent.

Dawnvale worked closely with the Harrison design team at Eldon Square’s new dining zone, completing the full fit out to include the shop fit out and bespoke bar & kitchen design, together with bespoke metalwork manufacture. 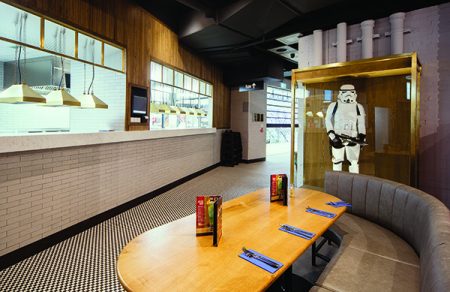 Neil Guest, Managing Director for Dawnvale commented: “This is the first of the new look TGI Fridays and the team really enjoyed the challenge this new concept gave them. The end result is a testimony to all the hard work and effort put in by all involved.”

“Newcastle loves Fridays and Fridays loves Newcastle – which is why we have chosen the city as the first place in the UK to try our brand new concept restaurant, which features an even better Fridays experience plus fantastic new food and drink.

“We feel that now is the perfect time to build on the UK-wide popularity of Fridays and serve up a new, fresh experience for our guests. These new restaurants will retain the heritage of Fridays but mix it with new offerings for all times of the day and night whether that is breakfast, a relaxed meeting over coffee, or an indulgent, celebratory, evening meal with live entertainment. We can’t wait to open our doors at Eldon Square to unleash even more Fridays fun to the local area.”

Reflecting on the project, Jake concluded:

“In terms of it being the first of a new rollout, we’re really pleased with how it came together. From what I have seen on social media and been told by Fridays, the feedback from the guests has been positive.

“I was honoured to be involved in the project and I am proud of the work we did in a short turnaround.”