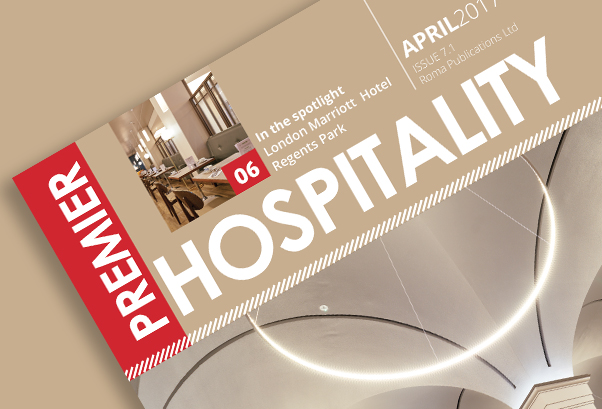 This Month in Premier Hospitality 7.1

In this month’s issue we take a look at Novotel Canary Wharf; we unveil Derby Manor; and we check in with London Marriott Hotel Regents Park refurbishment project.

The world’s tallest Novotel and a new flagship for the brand, Novotel Canary Wharf is an iconic, stunning new 39 storey addition to the Canary Wharf skyline. Located at Marsh Wall on the Isle of Dogs, the hotel, which opened in March, boasts 313 bedrooms, 26 individually designed suites, a state of the art gym and pool, nine fully equipped meeting rooms, and Bokan – a contemporary restaurant, bar and roof terrace with panoramic views across London.

Meanwhile, recently opened and already prompting outstanding reviews from guests – as well as being featured in the national and international press – is the newly and impressively refurbished and re-named Edwardian-built Derby Manor Hotel in Bournemouth. Originally known as Langtry Lodge, the property was purchased in Dec 2014 and was re-named Derby Manor in recognition of its history. Such is the success of the boutique hotel’s refurbishment that TripAdvisor users are already calling it ‘stunning’, and a ‘hidden gem’ of a hotel, attracting an unblemished top rating of five out of five.

And finally, a major refurbishment of the London Marriott Hotel Regents Park is now in the home stretch ahead of a September 2017 completion. The hotel’s lobby, executive lounge, restaurant and meeting and events spaces have been reinvented in the past 12 months with all 304 bedrooms also currently undergoing a significant remodel. Spread across seven floors, the hotel originally opened in 1973 and was last updated seven years ago with a revamp that was very much in line with the Marriott brand. The overriding aim of the current work is to give the hotel an individual edge by taking inspiration from the surrounding area.